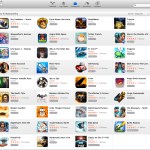 Looking at the “New & Noteworthy Games” section of the Mac App Store today, I see the following:

Every single one of those is an iOS port. It’s as if developers assume that Mac gamers want to be playing iOS ports. 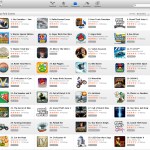 Taking a look at the “Top Paid Games” section however paints a different picture. The sky gamblers reappear in that list, as do the angry birds, but then things get a little more spicy. RollerCoaster Tycoon 3, an 8 year-old game, is currently holding the number two spot. Euro Truck Simulator is at number 3. Mac gamers like sims. But we also like sandboxes, with GTA: San Andreas at number 4. Even The Witcher 2 makes it to the top 40, despite having been available for less money everywhere else, and for a longer time, and requiring fairly modern Macs to run on. Surely Apple themselves are aware of this, at least if their awards are anything to go by.

Ignoring the virtual cesspool that is the “Top Free Games” list, it seems that Mac gamers are voting with their wallet and demanding games that are anything but iOS clones. But why?

To find out, we’ll need to examine what goes into a typical iOS game that doesn’t go into a typical PC game (and vice versa). There’s no question that the two platforms serve completely different kinds of games.

As a rule, iOS games are simple (often referred to with the meaningless term of “casual”) and brief. The prevalence of mobile gaming actually given birth to two entirely new game genres: “endless running” and “time management” (although not officially recognised by wikipedia yet), and both are extremely profitable despite providing none of the satisfaction found in desktop games (to the uninitiated, endless runners such as Temple Run see your character run through a randomly-generated (and infinite) landscape, with your only input typically being a jump button; in time management “sims” such as DragonVale, you give your characters tasks that take some amount of real-time to complete, leaving you staring at timers counting down, or invariably pay real-world money to accelerate).

Mac (or more correctly, “desktop”) games on the other hand tend to be more epic affairs. You’ll find a greater selection of RPGs and RTSs than would be feasible on iOS, and without being dismissive, Mac games generally just have more depth. You hear about “core” games on PCs and consoles, but rarely on iOS. Desktop games tend to be longer, more detailed, more expressive, and more expensive (there’s even the unsavoury trend of iOS ports being more expensive than the originals despite no additional features).

It’s been argued that the best iOS games are suited to the notion of mobility. They need to work well in a variety of environments, in changing conditions (shoddy wi-fi for instance), and possibly with the sound off. Most crucially, they can be easily interrupted (and by extension, are easy to learn). People typically want to game on an iPad in short bursts, or in an environment where they have to stop at any moment and do something else.

But even this doesn’t quite explain the disparity between the games available to each platform. I’ll happily find some game to have open on my Mac even if I’m distracted with other things, and you can bet it’s something with significantly more depth than your typical iOS game (currently Dungeons of Dredmor is my multitasked game of choice). And although I’d gladly play Dredmor on the iPad if such a thing was possible, being able to play something like King Cashing on my Mac doesn’t appeal to me in the slightest (though I’ve quite enjoyed it on the iPad).

The other common argument is that iOS marketplace is highly competitive. There are so many games, with many on equal footing, that it’s difficult to make something that will keep peoples’ attention. The solution to this however, seems to be to make games with weak reward mechanisms and a low cost to entry (or even free, as in “freemium”), that are as inoffensive as humanly possible. Indeed, there currently seems to be a popular, but very specific style of gameplay prominent on iOS, one that essentially involves repeating things and making incremental progress at a steady pace, regardless of skill, in a carefully designed manner to convince the player to spend money.

But I’d argue that the most important difference between gaming platforms is in their basic design. iOS games tend to lack any real substance, and don’t really capture the imagination.Take the 3-star system, for example. First popularised by Angry Birds, the idea is that merely completing a level isn’t good enough. Instead, completing a level with a minimum score will only grant you one star; completing it with a high score will give you the maximum three. It’s a great system. It encourages you to try and improve, and that leads to self-satisfaction. The levels are short enough that the real game for many people is trying to max everything out and collect all the stars, rather than just breeze through. Even getting all the stars may not prove to be enough for some, who will try to beat their own high-scores, just to see if they can. It’s all very King of Kong.

This approach simply doesn’t lend itself to desktop games however. It isn’t that the 3-star system isn’t suited to most Mac games, it’s that it isn’t suited to their design. Consider Arkham City. A typical “level” can take anything up to an hour to complete. Much of that gameplay is “discovery“. The player discovers a new area, with interesting art design and layout. They may discover interactions with the new environment. Invariably, there’ll be fragments of stories told and other bits of intrigue. And finally, there’ll be the discovery of the core gameplay, the “how” of the level. Much of this doesn’t lend itself to being replayed, at least not immediately, and certainly not over and over (unless you’re one of the few that goes for that sort of thing). Interestingly, in the case of Arkham City, the developers actually isolated the parts of the game that would be fun to replay over and over, and split them off into the separate “challenge” mode outside the body of the game, where they indeed serve the same purpose. This only goes to hammer the point home: if the best part of Arkham City was the challenge mode, there’d be no need for the rest of the game. But it isn’t, and yet I very much doubt I’d want to play Arkham City on my iPhone.

With this in mind, I’m led to the idea that beyond this sense of discovery, there’s a degree of needing to interact. An iMac and even a MacBook have one subtle, but important feature– the screen is fixed in place. Although the screen can be repositioned, it rarely is, behaving more like a window than say a magazine. With this in mind there’s a feeling of detachment from it, and you find yourself more content to observe than feel the need to constantly interact. A tablet or phone, however, is in your hand. You are already interacting with it, and need to keep doing so to resist the urge to simply put it down. I suspect this is why, for example, I’m much less inclined to want to watch cutscenes in an iOS game than in a Mac game (and even more so with a console). I will perhaps watch a YouTube clip on an iPhone, but it’s not comfortable unless I prop it up (at which point I stop wanting to interact with it).

All of this means then that we need different things from our two gaming platforms, not that one must be inferior to the other. Indeed, there are cases where a game does survive translation, and works well regardless of the platform. Galaxy on Fire 2, for instance, is enjoyable on both iOS and Mac OS. More than this, games such as Magic: The Gathering – Duels of the Planeswalkers (a trading card game which unfortunately is available only on Windows and not on OS X), are great on desktop systems, and remarkably, even better on a mobile device, due in a large part to the tactile nature of the game. Touch controls don’t lend themselves to every type of game of course, but on the other hand do allow for some new an interesting gameplay, as is the case with the incredible puzzler The Room, which wouldn’t really work on a desktop system.

iOS gaming is certainly maturing, and in some respects becoming a viable platform for some great games, especially once it learns a thing or two from its desktop counterpart. But crucially, PC gaming seems to be increasingly borrowing from iOS models, and what’s unfortunate about that is that it isn’t borrowing anything that benefits the player. Take EA’s (Windows-only) Dead Space 3 for example. Today it was revealed that you’d be able to spend real money in the (single-player, mind) game in order to accumulate virtual resources you’d otherwise have to actually play the game to accrue. Sounds exactly like something from a freemium iOS game, except that Dead Space 3 will be a full-price, triple-A desktop title on release. Perhaps EA will be able to walk the fine line between making money and providing value in this case, but arguably Blizzard wasn’t able to free Diablo 3‘s gameplay from the shackles of its auction house, and they invested a lot of effort into trying to.

Given these trends, the Tetris of 2013 would have a pause button as well as the ability to get specific shapes via in-app purchase, and then still have the nerve to have a leaderboard. Let’s hope it doesn’t come to that.