The first thing I notice is that my renown has not increased from the kills made in the last match. I guess this must be something to do with the game still being in beta. In any case, I’ve been busy since last week, doing a lot of reading. Knowledge, is after all, power. And with great power comes great responsibility. As such, I now feel responsible for the Nordic men and women of my team. But more on that later.

My aim this week was mostly to try and answer the questions I had last week. Right now I’m trying to avoid any of the more advanced topics, because I want to nail the basics before thinking about specific builds or strategies. With that in mind, I found this thread to be the most important thing to read as a beginner. It’s well written and includes images, and covers the basics of the interface, as well as some of the specific character classes (although some of the information appears to be out of date and contradictory).

So, here’s what I’ve learned since last week:

What’s particularly interesting to me about the strength/armour system, is that it means there are mathematical absolutes. For example, assuming that my character has a strength of 12, and is attacking a character with 6 armour and 12 strength, then it makes sense just to attack their strength regardless of my character’s break stat (either way they will be killed within two turns, but their damage output will be halved on their next turn). However, if my opponent is alert to this tactic, they can deliberately try to reduce my character’s strength (rather than armour) to ensure their character lasts a little bit longer. All of this makes me want to go and tabulate data and draw graphs. But there will be time for graphs later!

On to the characters then. To begin with, I feel it’s important to stick with the starting characters and learn them thoroughly before moving on to other types. These are characters I will be obsessing over, thinking about whilst eating lunch, having a shower, or making– well you get the idea. They need names. Conveniently enough, one of the new features added to the patch that came out this week was the ability to rename characters. I thought about using Marvel’s Thor series as a source for the names but decided that would be too on the nose. Instead, I’ve opted for my default source over the past few years, the Gobliiins series.

Without further ado, allow me to introduce the team: 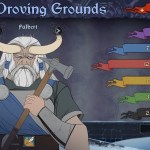 Abilities: Forge Ahead! (active, can make targeted character the next to move, and boost their initiative), Heavy Impact (passive, enemies adjacent to attacked enemy will take 1 strength damage) 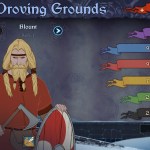 Abilities: Bloody Flail (BlF; active, does multiple hits to an enemy for 1 strength (bypassing armour) or 1 armour damage, with the last hit getting bonus damage per adjacent ally), Shield Wall (passive, increases armour of self and each adjacent ally, and this effect can stack) 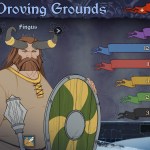 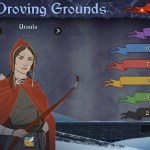 Abilities: Slag and Burn (SaB; active, creates an explosive slag trap that detonates on character’s next turn, doing strength + armour damage to any character on it, as well as detonating any other overlapping slag traps), Puncture (passive, does bonus damage to characters with reduced armour, provided the SA did not move that turn) 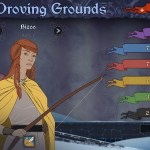 Abilities: Bird of Prey (active, gives bonus to range of shot, and never misses), Puncture (as for SA) 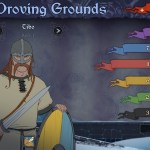 Abilities: Run Through (RnT; active, runs across board behind target character, doing strength damage to them, and 2 armour damage to each character on the way), Shield Wall (as for TS)

So what can I take away from all this? Well, firstly, there’s no character in the team that excels at armour-breaking. There are 2 characters (Blount & Tibo) that get bonuses for adjacent allies. Fulbert is the strongest, but not by much (he could potentially dish out 15 damage in a single turn once you factor in exertion). The two archers are the weakest of the bunch. Fingus is the most heavily armoured (and by a significant margin), SA the least (as an aside, even with those stats it wouldn’t be possible to kill her in one turn with anyone on my team). Overall, Fingus is the most resilient, with combined armour+strength of 23.

Enough theory for one week. To battle!

Well, this battle went extremely badly. I spent a lot of it fumbling around, unable to generate any synergy whatsoever. TheRaven was able to kill Fulbert within a couple of turns, and later elimitate two of my number in a single turn. I was unable to score even a single kill before it was all over. So well done to TheRaven, I didn’t stand a chance.