Since last week there’s been another update, which I have to assume is why my renown has dropped by 120 points. I’ve also realised that whilst I covered my starting team’s stats and abilities, I don’t actually know what the other character types do, which is kind of important seeing as I’ll be facing them on the enemy’s team. With that in mind: 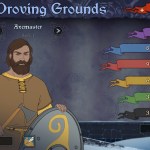 Abilities: Stone Wall (active, resists damage per hit for the next turn), Shield Wall (passive, increases armour of self and each adjacent ally, and this effect can stack) 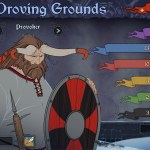 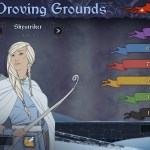 Abilities: Rain of Arrows (RoA; active, designates a tile which triggers damage and ends the turn of an enemy passing through it), Puncture (passive, does bonus damage to characters with reduced armour, provided the SA did not move that turn) 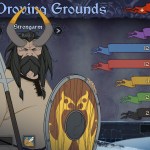 Abilities: Battering Ram (BtR; active, knocks target back 3 spaces doing armour damage based on how many characters the target is pushed through), Return the Favor (as for PK) 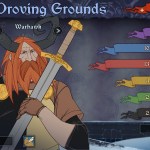 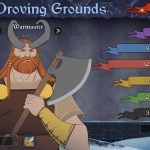 Abilities: Sundering Impact (active, does damage to strength and armor to target and adjacent enemies), Heavy Impact (as for WH)

(There also appear to be additional types due to be added at some point (which currently only show as question marks), so I’ll cover them when they become available.)

The Warhawk is interesting because his abilities depend upon being surrounded, which has a tendency to happen because of the large size of the unit. The Skystriker allows for unique approach, with her RoA ability able to prematurely end a character’s turn, providing you can guess where they plan to move of course.

I haven’t had much of a chance to dwell on strategy this week, so instead I jumped straight in to battle!

My plan, such as it was, was to try and bring down his toughest character first, and then see where I could go. As with the last match, I could tell I probably wasn’t going to win fairly early on. He one-shot killed each my archers with the run through ability and took down Fulbert, whom I’d used as a tank, really easily. His Warhawk wasn’t as devastating as I’d feared, but perhaps that was because I opted to spread out my units this time.

I managed to take out two of his units, before facing that now familiar defeat screen. Back to the drawing board for me.

In playing this week, I’ve found that there are a few things frustrating me with the interface*. First and foremost is that there’s a lengthy delay between clicking anything and the interface reacting to the click. Another is that the way information is presented is not always helpful. It was a while before I realised that hovering the mouse whilst in move mode will highlight potential targets and the damage that can be done to them from a given tile. Even so, unit stats are hidden most of the time unless you specifically click on a unit. Additionally, only if you click on a unit from the bar at the bottom will you get descriptions of their skills. And even doing this doesn’t clearly highlight that character on the battlefield. Finally, it seems that you can’t choose targets from this bar when using abilities. I’ll get used to it I’m sure, but in a game where, to some extent, time is of the essence, it all adds up to a frustrating experience.

*The Banner Saga is currently in beta. Things are subject to change and may not work as expected.