Another year, another version of Parallels to (hopefully) bring us closer to achieving Boot Camp levels of performance whilst remaining within Mac OS’s loving embrace.

Parallels Desktop 9 for Mac is now available, and just like last year, we’ll see if it provides a substantial improvement in games performance over version 8. Again, we’ll record the performance of several Windows-only games running in three environments:

We’ll be using the ubiquitous Fraps to capture various data, like frame rate over time, and record the output.

We used the following configuration to run the tests:

Some important notes before we begin:

For each of the tests, we used a built-in benchmarking utility if one was available, otherwise loaded up a save game from the mid-point of the game and recorded playthroughs where we tried to perform the same actions each time. Slight variations in gameplay are therefore to be expected.

One of the purported benefits of Parallels 9 over previous versions is compatibility with Windows 8.1 and OS 10.9 “Mavericks”. We didn’t take advantage of either of these, being that most Windows gamers are currently running Windows 7, and OS 10.9 has not been released yet.

We ran DirectX 10 versions of every game (where available), as that’s the latest supported DirectX version in Parallels. Though we did our best to ensure that none of the games tested used DirectX 11 when doing the Boot Camp versions, it’s possible that some of the games do this automatically without letting you know.

It’s also worth pointing out that where DirectX 11 versions of games are available, performance in Boot Camp may be better because of this, in addition to the differences seen in our benchmarking process.

As noted above, we optimised the settings to run in Boot Camp. Boot Camp results are only used as a baseline reference. Just because the overall frame rate appears low in any of these tests, doesn’t mean that you wouldn’t be able to change the settings to get a decent frame rate in either versions of Parallels. Frame rates recorded are therefore for the purpose of relative comparison only, and should not be taken as an indication of real-world performance.

Likewise, having FRAPS record and measure gameplay itself has a significant impact on performance, so expect real-world performance to be better than the figures below.

In terms of graphical configuration, there was very little difference between either version of Parallels.

This is the configuration screen for Parallels Desktop 8: 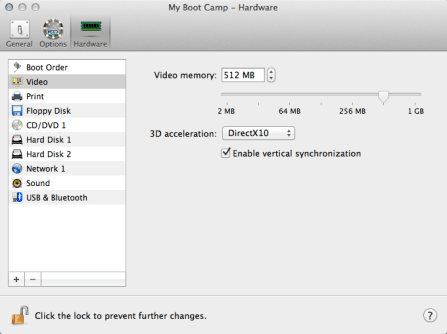 And here’s the same screen in version 9: 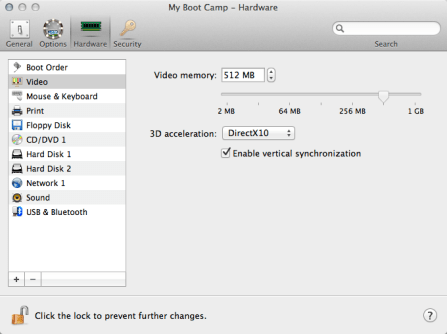 The game that some called game of the year, Far Cry 3 is no slouch when it comes to visuals. As with most of Ubisoft’s titles, even though they’re happy to feature Macs in their commercials, no-one there thinks to actually support the platform. Parallels then might be the only way for Mac gamers to give Far Cry 3 a spin.

So a very slight improvement over PD8 there, but still a ways to go to catch up to Boot Camp.

Crysis was always a hallmark of how detailed PC games could be. Crysis 2 was a little more consolified than its predecessor, but it is a graphical powerhouse nonetheless.

It seems that if anything, the frame rate is slightly better in version 8 here, but they are both well below the Boot Camp rate (which appears to have been capped to 30). Also worth noting that the Parallels versions both looked rather blurry.

Another popular game franchise that has failed to materialise on Mac OS, the controversial space opera features lots of pretty lasers to point our calculators at.

Again we’re seeing slightly better performance overall in Parallels Desktop 8, and again we should note that the Boot Camp frame rate has been capped, this time at 60 fps.

A fast-paced fantasy RPG that didn’t work out too well for its developers, but is a pretty good game on the whole, this game is like a modern take on World of Warcraft.

Kingdoms of Amalur: Reckoning frames over time (lower is better)

Really not much in it. Again we’re seeing a hairline improvement in version 8, and frame rate capped at 60 in Boot Camp.

Relic’s Warhammer 40k-themed real-time strategy has a built-in benchmark test, so that’s a useful way to give us directly comparable results.

Dawn of War II frames over time (lower is better)

Staying in the Warhammer 40k universe, we move from RTS to third-person shooter with Space Marine.

Parallels 9 is doing a bit worse here, and the Boot Camp test is capped at 60 fps.

Another rather good game from a now defunct studio, L. A. Noire took the GTA formula to the 1940s.

L. A. Noire frames over time (lower is better)

L. A. Noire frame rate over time (higher is better)

Although the game ran in Parallels, it was basically unplayable compared to the Boot Camp version (which itself performed surprisingly badly).

STALKER is a highly praised open-world first person shooter. We applied the essential Stalker Complete 2009 mod and gave it a burn.

Of all the games we tested, this was the only one that ran on Parallels Desktop 9 but not version 8.

Although Parallels Desktop 9 seems significantly better here, it’s worth noting that something caused the game to stall completely in both versions.

SSF4 also has a built-in benchmarking test, but sadly it doesn’t run the same test every time.

Although the performance was nearly identical in both Parallels 8 and 9, Parallels Desktop 9 seems to show less variance.

Obsidian’s guns-and-conversation first-person RPG also gets a mod makeover, and run through our analytical visors.

This has showed the greatest improvement between 8 and 9 of all our tests, but even then it’s not that significant.

An old-school top-down shooter with new-school graphics. We lock and load some data and find out how it performs.

And that’s about as close as it gets. Both Parallels versions were extremely blurry.

For the sake of completeness, we also tried to test the following games, which did not run properly with either version of Parallels Desktop:

It seems that Parallels Desktop 9 isn’t the significant upgrade in terms of graphical performance that Parallels Desktop 8 was. There’s a marginal improvement in frame rate at best, and a decrease in performance at worst; and really not much difference in terms of compatibility. Compared to our Boot Camp base line, there’s still room for improvement. It will be interesting to see how OpenGL 4 in Mavericks changes the balance once it’s released.

We did note (but did not qualitatively test) significantly improved loading times for many of the games tested however, so you might feel that’s worth the upgrade cost, or you might simply want to make use of the 6 months Parallels Access (that we also took a look at) that’s included.

That said, really I was pleasantly surprised by the number of games either version of Parallels would run now, and all the above games can certainly be tweaked to run adequately. If you’re not already a Parallels Desktop user, now might be the best time to take a closer look.