One of the biggest problems with Macs (at least as far as gaming is concerned) is the limited availability for graphics cards. Apple doesn’t really provide any way to upgrade the graphics card beyond what it ships with, which is a real shame. On the back of our guide to installing a 5XX-series Nvidia card, rumours started surfacing that it would be possible to install a 6xx-series (“Kepler”) card in OS 10.8.

Update: According to this post, a GeForce Titan should also work, as of OS 10.8.4.

Update: See this excellent thread on Macrumors for up-to-date information and advice.

For Windows gamers, the Kepler range of cards are revered as some of the best so far, with great overall performance, and great value. It makes sense then, for serious gamers with Mac Pros to get one of these and use it in Boot Camp, and maybe even get a performance boost in OS X too.

Thanks to a post by Macrumors member slughead, who confirmed it was indeed possible and provided a detailed explanation, we’ve done some tests and can now confirm that it will indeed work. This time around it should be a lot more straightforward. Read on for the details.

As the Nvidia cards don’t have an EFI Rom, you’ll be unable to see the boot screen, which means you can’t boot into recovery mode. For this reason, you should hang on to your original graphics card to be able to (temporarily) swap them back as needed.

At Mac Gamer, we use the very solid Nvidia GTX 670 (specifically, the 2 GB EVGA GTX 670, which seems to provide the best price/performance ratio). Other cards may work, check the netkas.org and macrumors forums.

You can also use a “Fermi” (5XX) series card too, see our guide for more information.

There are two main issues that make this process tricky: power and software support. The power issue is less of a concern, particularly if you pick the right graphics card. Basically, almost every Mac Pro ships with a graphics card that uses a single 6-pin PCI-E power cable (that runs from the motherboard to the card). However, every Mac Pro motherboard actually has two sockets available in order to power more demanding graphics cards- you just need an additional cable. You can usually find 6-pin to 6-pin PCI-E power cables for Macs on eBay, though there are probably other places to get them. The only thing to make sure of is that the graphics card you intend to use requires 2 x 6-pin power connectors (the GTX 670 we use does).

Other cards that use an 8-pin power adaptor reportedly can be used with an 8-pin to 6-pin adaptor, as long as you don’t manually overclock them. Another option is to connect an external power supply unit, for which slughead has written a detailed guide. Our recommendation however, is to stick with cards that provide  2 x 6-pin connectors.

The last consideration is the amount of memory on the board. If the card you install has more than 2 GB or video RAM, you may have to modify some drivers to get OpenCL support. Netkas has provided all the details to get that to work, so have a read of that, and also this thread by xav8tor at Macrumors, and know what you’ll be getting yourself into.

Finally, if you can get your hands on an additional Mac-compatible graphics card that doesn’t require external power (such as the GT 120), this will act as a “helper” card, allowing you to see the boot screen and boot OS X even if something isn’t configured correctly. You can occasionally find these on eBay as well, but make sure you get one appropriate to your Mac Pro model (Mac Pro 1,1 require a different card to the others). This step is optional however, if you don’t get the helper card, you can still resolve problems by swapping the original graphics card back in.

You should be running Mac OS 10.8.2 or higher. It’s also recommended (but not necessary) to download the Mac CUDA driver, which will add an icon to the System Preferences application and will also notify you about any driver updates (it also provides a handy way to verify which driver version you’ve got).

In terms of actually installing the hardware, it’s merely a matter of removing the original graphics board (note that newer Mac Pro’s have a locking bar to hold the graphics card in place that must be swung out of the way first), disconnecting the power cables, and then installing the new one and connecting both power cables to the mew one. However, some of the following steps get a little bit tricky, so I would strongly recommend reading through the rest of the steps first, and you will need to be prepared to constantly swap the original and new video cards back and forth until the drivers and patches are woking correctly.

You should try and do as much of the software installation as possible before swapping out the hardware, as all of the software modifications should work even if you haven’t installed the new hardware yet.

One thing it’s worth pointing out, at this point you can run Windows without any problems. The latest Nvidia windows drivers will work fine in Boot Camp if you’re using it, and it’s a good way to ensure the hardware is installed correctly. However, you’ll need to have set your startup disk to always boot straight into Boot Camp, as you won’t be able to see the boot screen.

At this point you should be able to boot into OS X (bear in mind the screen will be blank until it gets to the log in prompt).

You can verify everything is working by checking the About This Mac window: 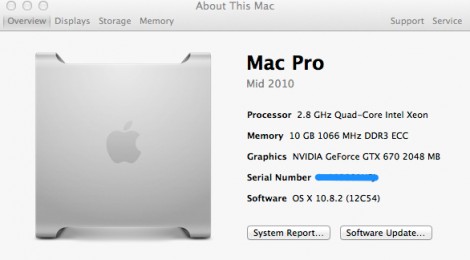 At the time of writing, the Nvidia drivers (295.30.20f02) are not particularly well optimised for the 6xx-series (or the 5xx-series for that matter), but supposedly better drivers are on their way.

You can benchmark the GPU by using the OS X version of the LuxMark testing suite. 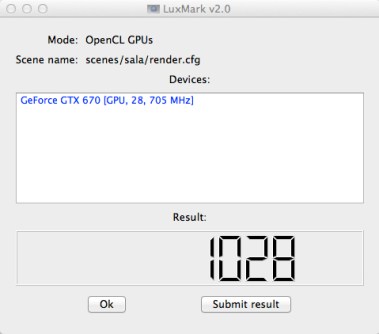 It will be interesting to see how the rumoured drivers will fare once they’re released, and of course we’ll have a full report on that as soon as we can.

This method has been tested and works for OS 10.8.2 and higher. However, it is important to note that there are no guarantees that Apple won’t make changes to the OS that prevent this from working. That said, if you want the best performance out of your Mac in Boot Camp, this will really give your system a boost in the graphics department. For pure Mac gaming, you’re far better off with the 570 for now (although we’ll reserve judgement until the new Nvidia drivers are available). We’ll try to keep this post up-to-date with the latest information. Credit goes to slughead at the Macrumors forums for doing much of the legwork on this.

That’s about the same as what I get. Unfortunately the performance just isn’t as good as the 570 on OS X.

I know that these posts are about a year old but I thought I’d just clarify that non-efi GPU’s in macpros run at PCI 1.1 speeds which is considerably slower than pci 2.1 (unlike the relaively small gap between pci2 and pci3.) This is especially noticeable in bootcamp (or at least it was for me. That said it left my old GT120 in the dust.