is out now, letting you run Windows games on your Mac without rebooting. Having had a love-hate relationship with Parallels, where I’d try gaming with it on occasion and inevitably get frustrated and just use Boot Camp, I figured it was time to have another look.

In this first part, we look at Parallels running on a Mac Pro, souped up with a GTX 570. We upgraded from Parallels 7, and used our Boot Camp Windows 7 install for all our testing. Installation was surprisingly painless (aside from an odd bug affecting Wacom tablets) and we were up and running almost immediately.

There are some new features that affect integration with OS 10.8, but we jumped right in to the important stuff– the video options. 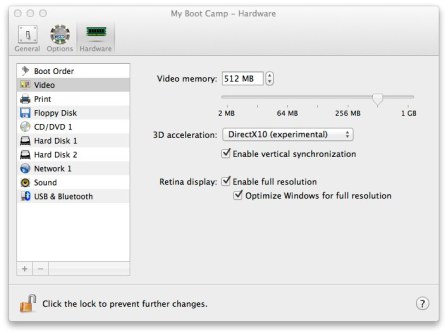 Interestingly enough, there’s a setting for “DirectX10 (experimental), so that was the one we opted for. Parallels are boasting that you’ll see a 30% improvement in 3D graphics over Parallels Desktop 7. But are they to be trusted? We fired it up and did some tests to find out.

First things first, for this battery of tests, we are using the following configuration:

We ran each test on Parallels version 7, Parallels version 8, and in Windows/Boot Camp (as a baseline). We recorded the video and frame rate simultaneously using FRAPS, whose presence may or may not have skewed some of the results.

The ubiquitous DirectX 9 benchmarking utility was our first port of call. We ran all the tests in the suite, with anti-aliasing and filtering maxed out.

So, in the benchmark at least, there’s a definite improvement over the previous version. Going by the 3DMark score alone, the 30% claim is justified. What’s also interesting is that we’re catching up on pure Windows here, which is itself only scoring a 25% improvement over Parallels.

But no-one trusts a standard benchmark, so we give you: Games We Actually Ran, with glorious DATA!

Space Marine is a pretty run-of-the-mill game in terms of graphics performance, it generally runs very smoothly. We carved up some Orks for a minute and then had a look at the results.

Embarrassingly, the stats didn’t get properly for PD7 run, hence on the first half are there. There was also severe frame drop in the PD8 version when a Steam notification popped up. Moving on…

Skyrim has been criticised for its lacklustre graphics engine and textures. However when bolstered with some of the many mods available (as we’ve done in this case) it can look quite spectacular.

So not a huge improvement over Parallels 7 here.

The Witcher 2 is one of the most graphically intensive game ever created, so it seemed a natural fit for these tests.

Well this was so unplayable on Parallels 7 that we gave up on it. With Parallels 8, it’s still not very good, but at least you have a fighting chance of playing the game (especially if you tweak the settings). Also notable was that there were strange graphical issues with Parallels 7 that didn’t exist with 8. I’m not sure what the cause of the frame drop was in the Windows version at the end.

As with Skyrim, Fallout: New Vegas  can be made to look spectacular with the liberal application of several mods.

That’s pretty much identical between the two versions. Please try to ignore the fact that I kept getting killed within a minute…

In both versions of Parallels, Volition’s freeform, silly take on Grand Theft Auto crashed in DirectX 9 mode. It ran under Parallels 8 in DirectX 10 mode, but with severe graphical glitches. We gave up at that point.

Of all the tests, this was the one that demonstrated the 30% improvement in performance in a real game. Ignoring the end of the Windows result (it appears some background process kicked in), this game most closely resembled the results of the 3DMark benchmark.

Coming up in the next part, we do some tests on the MacBook Pro with Retina.

Guys, compare with Fusion! And you will notice how great is PD8!

Should of also compared Bootcamp

The orange line in each graph is for Boot Camp.

Sorry I missed that. Then this is exactly was I was looking for. Great Job!!

I am planning to get a NEW 27″ IMAC [if they ever come out] and use Bootcamp or Parallels Desktop® 8 for Gamming.
I work with Photoshop, and Adobe Premier, After Effects and I play WoW on MAC and Star Wars Old Republic and other PC only games. I have a Synology DS212+ NAS for Data and Backup.

The problem is with Bootcamp you need to partition your drive. You don’t need a whole new drive. (Note – 3TB drives can’t currently be partitioned for Bootcamp.) and I rather use Bootcamp than Parallels. This why I was looking for information like what you provided. I am confused as to what Drive setup I should get? Do you have any Ideas on the matter?

There must be a number of Gamers that are in the same quandary.

Great article and awesome website. I just got a copy of Parallels 8 and Windows 8 (Release Preview) and I downloaded a couple first-person shooters. The frame-rate is so poor it makes the games unplayable. I tried to download drivers from Nvidia’s website (Discrete graphics is NVIDIA GeForce GT 650M). I feel like Parallels isnt seeing me discrete graphics… what do you think?

Parallels uses its own drivers, so there’s no need to download nvidia windows drivers. It might be your version of Mac OS (All our tests were done with 10.8) or it might be something specific to Windows 8 (which we didn’t test at all).

Thanks for the link!

so parallels 7 is better?

do i need to buy windows aswell to run it?