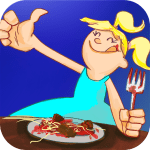 A game where you run a restaurant in a tower block, managing menus, cooking meals, and serving impatient customers.

Many games strike an odd balance between theme and gameplay. BioShock: Infinite sees a battle-weary protagonist eating candy out of trashcans in order to heal himself. In Arkham City, Batman will be content to collect trinkets whilst the world burns. This dissonance doesn’t necessarily make for a bad game of course, but it’s rare to see a game that takes a theme and runs with it, letting it define the gameplay.

Cook, Serve, Delicious! is such a game. So much so that I can loosely describe the gameplay, and then talk about the rest of the game in terms of how it feels to single-handedly run a restaurant and not feel like I’m failing in my duty to properly critique the game.

It’s a port of an iOS game, but it’s one of those rare (i.e. “good”) ones. The original was very much suited to touch inputs, with much of the gameplay based around gestures. The Mac version of the game includes a number of features over the mobile one, and perhaps tellingly, doesn’t describe itself as “casual”, despite outward appearances to the contrary.

The setting is innocuous enough: you are a restaurateur in the SherriSoda Tower, given control of the somewhat decrepit Cook, Serve, Delicious! restaurant, with the sole aim to raise it out of fast food obscurity into a five-star gourmet establishment. To get there, you’ll need to buy recipes and the equipment to cook them on (you don’t actually need to deal with ordering ingredients, however), and most of these can be “upgraded” over the course of the game. You then set the day’s menu, and the rest is just getting the food to the customers.

This is where the real meat (if you’ll pardon the pun) of the game lies. You fill an order by following some instructions. A customer might request a soda, and serving it to them requires selecting the correct cup size, flavour, and extras (such as ice or flavour enhancer). You do this in a manner similar to operating the machinery, moving the cup under the correct nozzle, hitting buttons to pour the drink and add extras as needed (for which you can use the mouse, but will probably prefer the keyboard shortcuts). More complex food have more complex cooking requirements, for example chicken needs to be tenderised exactly six times, and lasagna must be layered correctly. Customers will be displeased if you make a mistake (there’s no undo), but at least you’ll get paid. No, the real enemy in this game is time– take too long to fill an order and the customer will walk. More than that, leave any customer waiting for too long, and they’ll walk. The customers in Cook Serve Delicious are both impatient and unsympathetic.

To describe it as frantic would be doing it a disservice, given how often that word is used in the context of iOS games. During the lunch-time rush, you’ll have to take orders, prepare and cook the meals, and serve them. And then prepare and cook the food whilst taking more orders. And then serve the food whilst cooking more food and taking more orders. You will get the orders wrong. You’ll neglect to take orders from impatient and short-tempered customers. You’ll forget to actually serve the food you somehow managed to cook. Quickly, you’ll learn to adopt more of a triage approach, to just try and not screw up too badly, rather than aiming to get everything perfect. Oh, and if that wasn’t enough, you’ll need to need to wash dishes, empty trash, and clean toilets. Whilst all of this is going on. This is a game that actually made me loudly curse that I needed to wash my hands after cleaning the toilet.

As if to further mock your efforts, you’re awarded a combo multiplier for each order you manage to serve correctly in a row, which gets reset if a customer leaves unfulfilled. At the end of the day, you collect your earnings as well as any tips (if any), and then prepare to go through it all again the next day. To break things up, you’ll receive a number of rather humourous e-mails from customers and other tower residents. Each day you’ll also have a “buzz” score, based on how well you did the day before, as well as what’s on your menu (you’ll need to shuffle your active menu regularly to avoid being perceived as stale, as well as factor in things like not having too many fatty foods, catering to different times of the day, and even the day’s weather). More buzz means more traffic, which ultimately means more money, but also busier days.

To progress through the game, you’re given a set of tasks for each star rating. So you might have to collect a certain amount in tips, attain a particular combo multiplier, and so on. These requirements can take a while to reach, and actually the sole criticism I have of the game is that these are far too strict, especially the stock requirement to “reach the 20th day”, which can mean you’ve completed the other requirements early on, and then have to simply grind out the remaining days.

The game does a decent job of throwing stumbling blocks in your way, with things like health inspectors checking that you do all your sanitation chores, and even robbers making appearances. The in-game e-mail system occasionally provides you with optional challenges, and there’s a decent amount of foods, equipment, menu slots and upgrades to spend the case you’re collecting on for much of the game, and there are also other modes, such as catering for parties that unlock as you play. The game pitches its humour at just the right level, with facepalm-worthy e-mail messages, and wryly-named recipes. That said, the grindy nature of the game make it unlikely to hold your interest for much more than 5 or 6 hours unless you’re really dedicated. Still, it’s engaging for that duration (or you can treat it as a game for rainy days), and I found myself subconsciously flexing my arms and fingers before beginning each day, to prepare for the 7 minutes of concentration required (though fortunately there is a pause button if you should need it).

What’s particularly interesting to experience is the way that muscle-memory takes over after a while. Although I never got so good that I could recognise a particular recipe by its name alone, completing the chores often required no real attention; with my fingers automatically dancing across the keyboard to get them done. Similarly, the trickier foods became much easier to prepare after some time, and even finding the right ingredients for certain meals was easy, thanks to the default hotkeys (although some were counter-intuitive; I’d have preferred if “cheese” was always bound to the “c” key). The keys are all bindable for each food, which is handy if you really want to streamline the process for maximum speed. Each food also has a practice mode, where you can play through the process associated with cooking the food before you decide to buy (or if you want to see just how difficult preparing sushi is early on).

As I noted right at the start of this review, the genius of the game is in how well it marries its mechanics with its theme. The need to have single-minded focus for the duration of each in-game day is both exhausting and exhilarating, and it’s a rare game that can make such demands of you whilst also being enjoyable.

Although there were some issues with the game running on OS 10.9 when it was first release, at the time of writing these appear to have been fixed, although the Steam overlay doesn’t appear to work. It runs windowed by default, but can be switched to fullscreen if you prefer.

The game has an attractive art style, and music that somehow doesn’t get old (you’ll probably want to keep the sound on for this, as the aural cues can be extremely helpful).