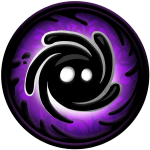 A platformer where you play as a creature of the void called Born, who is able to change the physical properties of the environment in various ways.

Nihilumbra is a game with a great idea, an idiosyncratic implementation, and an awkward name. It’s a platformer with (groan) puzzles, where you control a creature of the “void”, who starts off as a cute blob and then inexplicably transforms into a desert nomad analogue. Really, the story hasn’t much going for it, but that’s not why we’re here. We’re here because the game offers something interesting beyond the jumping and running.

Throughout the game you’ll get to visit several different worlds. Within each one you’ll acquire a new “colour”. Each colour can be (with the mouse) painted onto the landscape to imbue surfaces with new properties. So you can hose the ground with blue, making it frictionless and letting you move faster, or making unsuspecting enemies slide to their doom. Or you can paint an area green, making it bouncy. Sounds like Portal 2′s gels, right? And it absolutely is, although the puzzles never reach that level of head-scratching complexity.

In total there are five such colours to acquire, but there’s not much in the way of interplay between them. You’re also limited in how much of each colour you can use, which felt like an arbitrary restriction that meant a bit of housekeeping in order to vacuum up no longer needed colours. Fortunately the colour reserves are replenished at each of the frequent checkpoints, so it was rare that I found myself running out.

At the end of each level, there’s a sequence where you have to outrun a big wall of instant death, which adds a little bit of time pressure into the mix, ramping up the difficulty a little bit, but anyone with any platforming experience probably won’t break a sweat. These segments are just the right length, never reaching a point of frustration, and being long enough to break the steady rhythm of the rest of the game.

The game insists on talking to you constantly, and honestly I found this to be pretty irritating. Every screen has some narration with accompanying text, and the whole thing just seemed like someone’s delusional rambling as opposed to a cohesive, interesting script. Even worse, the narration often took longer to read out than it did to progress to the next screen, so I didn’t even get to hear all of it anyway.

The translation from touch screen seems to have worked well, you can rely on three keys for the platforming, and then just use the mouse for splashing colour about. In fact, it’s a good fit for keyboard and mouse, letting you quickly select different colours using the number keys, and allowing you to move and paint at the same time. I favoured spraying blue at the edge of the screen whilst running in that direction in order to speed up my movement, and if I can level some strong praise towards the design of the game, it’s that it just gets out of your way and lets you splash colour around everywhere. This isn’t Portal 2’s careful guidance on which surfaces can be used– barring a few exceptions, if you see a surface, you can add colour to it. There were a couple of occasions where you needed to have pixel-perfect positioning, which led to a few deaths in my generally gung-ho approach, but these were rare.

Once the game is completed there’s the option to play it again in “Void Mode”. This are variations on the original levels, with many new hazards, but you have every colour at your disposal from the outset. Here the game does become significantly harder, with timing and precision a crucial factor, but that said, you’ll also encounter more frustration as the controls are not quite as tight as say Super Meat Boy. I do wonder if many players will overlook this mode, instead playing the base game to completion and feeling they’d had their fill (as I initially did). Indeed, there’s such a big difference between the two modes that it’s like playing a different game.

On the whole, the game is enjoyable, if a little on the short side. I wouldn’t describe it as particularly challenging, either in terms of the puzzle-solving or the platforming (at least not until you unlock Void Mode), but it’ll provide a good couple of hours or so of entertainment for all but the most diehard puzzle-platforming fans.

Somewhat strangely, the game will not work with an Apple trackpad– you’ll need an external mouse (a controller is not supported either). From a quality standpoint, it’s a little rough; the animation in particular lacks the detail of other puzzle platformers, such as Limbo, with which Nihilumbra shares a mostly monochrome colour palette.

The music is rather inoffensive, the sound effects are forgettable, so the only real duff note is the narration, which is constant and somewhat droning.