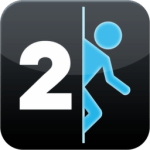 Undoubtedly the best game to grace Mac OS X in 2011, Portal 2 was released on all platforms simultaneously. It is a high-quality experience throughout, in terms of the visuals, puzzle-solving gameplay and humorous storytelling.

The game sees you trying to escape from a “testing facility” under the control of a crazed (but hilarious) artificial intelligence. To do so, you have only the ability to move (and jump) and a device that creates portals (essentially doorways where you place an entrance somewhere and an exit somewhere else). Later on, you’ll also have to deal with laser beams, (cute) automated turrets, and gels which can be sprayed onto surfaces, adjusting their properties in some way.

The game does a great job of keeping you entertained throughout. New twists are introduced at a steady but manageable pace, and whilst some require a great deal of thought, none of them seem unfair once you’ve figured them out. There’s constant chatter between characters between each test chamber, with some truly hilarious jokes peppered throughout. If you’ve played the original, the biggest change you’ll notice is that none of the puzzles really depend on good reflexes any more.

Once you’ve completed the base game, you can retry levels in order to attain the best possible speed, play one of the numerous co-op levels, and try some of the many, many mods and community maps available.

The Mac version performs only marginally worse than the Windows version. We found it best to use double-buffering rather than triple-buffering, set the anti-aliasing to 4x, and maxed out everything else on our NVidia-based Mac Pro.

Portal allows for co-operative multiplayer, with additional puzzle maps requiring a friend to join you to solve them. The quality of these are on par with the single-player game, so they are definitely worth a look.

Cosmetic items can be bought for your robot character for use in co-op mode, from within the game.

Modding is fully supported. To install mods, put them in ~/Library/Application Support/Steam/SteamApps/common/portal 2/portal2/maps or visit the Steam Workshop.