And so begins the Control Command Escape list of the best Mac Games of 2012. We’ll be counting down our top ten games, with special nominations from both Ninja Foodstuff and regular contributor ThePoison33, before finishing up with the coveted ^⌘⎋ Game of the Year this Friday.

Despite having crippling DRM through always-online requirements, severe launch problems, and a cynical microtransaction system, Diablo 3’s biggest problem was simply that it just wasn’t as good as everyone hoped. Part of the problem was that Blizzard seem to have spent so long navel-gazing about World of Warcraft and MMOifying Starcraft, that they’ve forgotten that people sometimes want to play a game for fun, without trying to reach the peak of an impossibly high levelling system in as short a time as possible. The single biggest issue with the gameplay was simply that it had to be played through at least once before it became interesting, by which point the atrocious storyline had left so many people numb that it got abandoned. 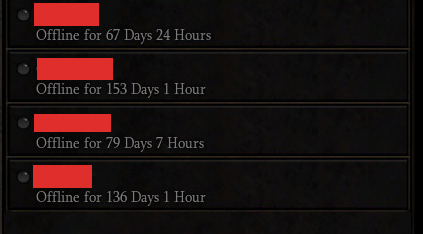 That didn’t stop it from selling millions of copies however, and Blizzard have really outdone themselves with the post-release support, adding new features and polish all the time. Arguably they should have focused more on in-game events than end-game content, but now that the DRM smoke has cleared, there’s still a reasonable game in there (at least until the wait for Torchlight II is over).

So with all that negative criticism, why does it gain a place in our GOTY charts? Simply put, with Diablo III, Blizzard proved that they are willing give Mac gamers the respect they deserve, with the Mac releases coinciding simultaneously with Windows versions, support for Retina laptops as soon as they became available, and outstanding quality and performance. If ever anyone questions the ability of a Mac to play games, fire up Diablo III.