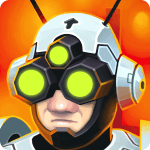 A tower defence game with all the trimmings, and ludicrous enemies to fend off.

Tower defense is a surprisingly under-represented genre on the Mac. There are some stalwarts every gamer should play, such as the excellent Defender’s Quest, as well as the Anomaly and Cubemen series’. It’s a vastly different story on iOS, of course, where that platform is over-saturated with examples of tower defence games, and indeed, which has served as something of an evolution chamber for it, with various features like hero units and upgradeable towers added over the years to the basic “plant down some towers to defend against waves of enemies” template. And from within this smelting pot of ideas comes OTTTTD (Over-the-top tower defense).

OTTTD is from the modern branch of the tower defense genre that believes the player should constantly be occupied with busywork (something I’m not personally a fan of), and with that in mind, you get the full smorgasbord of clickables: controllable heroes (each of which has their own skill tree and equipment loadout), upgradeable towers (each of which can also be converted to one of two advanced types), and various cooldown-powered hero abilities.

Crucially, the enemies in OTTTD bite back, so you have to keep towers repaired (either with engineer heroes or hard cash), and heroes out of trouble– there’s a sort-of permadeath system whereby if you lose a hero in battle, you have to wait for around an hour (real-time) before they are cloned for use again–

Let me rephrase that a little bit. When playing the game, if one of your (upgradeable) hero units succumbs to too much damage, they can’t be used for a set amount of time. Faced with this situation, you have a couple of options:

You would think that this might lead to some tense gameplay, where you frantically struggle to protect your hero units at all costs. In fact, this is what happens:

It’s a weird thing isn’t it? To encourage people playing your game to go off and play something else instead of the game you’ve (presumably) lovingly built, or face being engulfed in a downward spiral of losing, where you play a level you already lost to over again at a disadvantage. Now some people will argue that this hero management is part of the strategy, that you have to ensure that you rotate through your roster of heroes often enough to prevent this being a problem (given that the heroes are specialised and useful in different circumstances, that doesn’t work for me). Some people will also argue that the game gives you enough virtual currency for instant revivals (because apparently everyone with an iPad is an utter moron who would rather keep pumping money into a game they’re losing at, than on buying an entirely less cynical game, or go and read a book or something), but if that’s really the case (and it probably isn’t if you lose several times in a row), why keep the system in there in the first place (unless you are not really that interested in adapting your game for a different platform). I want to spend my time playing a game, I don’t want a game to waste my time.

What if you can get past this and not let it bother you? Well there are some other issues to contend with. The interface hasn’t been improved from the clearly touch-optimised original, with the mouse cursor standing-in for a finger. You can zoom in a pointlessly small amount so you can take a good look at the low-polygon models, you can’t pan the map by moving to the edge of the screen as you might expect (you have to drag on the terrain) and the general chunkiness of the buttons and whatnot get in the way more often than not (there’s no rotate option). I could go on, but I think I’ve made my point.

So what of the game systems? Just how much will it tax your brain? You get to make a lot of decisions during the course of the game, with three damage types (ballistic, energy, and explosive) in play, so you have to pay attention to which enemy types are resistant to which types of damage. There are allocated spaces for towers on each map, so there’s no opportunity for mazing enemies like you might do in Defense Grid, for example. The game’s incredibly stingy in terms of selling towers, as you’ll get very little money back for a fully-upgraded tower, and zilch for a damaged one, meaning there’s no strategy in the world that justifies swapping out towers as the situation changes. On balance though, I’d say that if you were of the mind that you could forgive all the other issues, you’d find a reasonably competent game here.

There are 20 levels in all, most of which involve simply trying to defend against a small number of waves of enemies (though each wave is quite large and can include multiple enemy types), but there’s the occasional level that mixes thing up a bit, such as bosses that must be destroyed before they spawn enough minions to overwhelm you.

Then there’s the OTT nature of it all. Maybe I’m too old but I find it hard at this point to crack a smile when I see a wave of Sharks-with-Lasers-attached approaching my base (and certainly not when you run into them again and again on subsequent levels). Still, there are things about the game that did genuinely make me smile, notably the in-game encyclopedia, as well as some of the mission briefings. Overall though, it’s a game that seems to me to try too hard to be wacky, and could do with being a bit more self-knowing. Still, some people will play the game and no doubt be all “LMAO teddy bears with eye-lasers”. Who am I to judge?