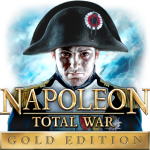 The sixth game in the Total War series (and the third to be released on Mac OS X), Napoleon builds on its predecessors, adding improved visuals and AI to the strategy and tactical hybrid gameplay.

Set during the late 18th and early 19th centuries the player, as the title suggests, assumes the role of Napoleon Bonaparte as the game follows his various campaigns across Europe, Africa and the Middle East. The game is split into four campaigns each following different periods of Napoleon’s military life.

You may remember that Empire: Total War was the first in the series to introduce naval combat, it was also the first to include a special “story” campaign mode. Napoleon: Total War keeps both of these features and offers only minor improvements, besides featuring four campaigns as opposed to the single campaign to be found in Empire: Total War.

In the campaign mode following Napoleon’s story you take control of Napoleon himself and issue orders on his behalf throughout the entirety of his military career, from his home on the island of Corsica through his conquests of Italy and Rome. Additionally there is an event focusing solely on the battle of Waterloo. You can also choose to play the classic Total War campaign titled ‘Campaigns of the Coalition’ in which you take command of one of the following four factions – Austria, Great Britain, Prussia or Russia.

Fans of the series will already know what Napoleon: Total War has to offer, besides the campaign, like the previous games it features two modes of gameplay, a turn-based geopolitical strategy and real-time strategy battles.

The geopolitical strategy requires players to embrace tedium by building structures, creating sources of income, recruiting and managing armies as well as managing diplomatic relations with the other in-game factions. This part of the game offers you a bird’s-eye view of Europe which is split into multiple regions and features the various famous towns and cities of the respective region. In this view you control every aspect of your empire. You can move your agents or spies around Europe, ordering them to assassinate or sabotage your enemies. Perhaps you’ve mistakenly entered into war with a friendly faction, from this map you can open your diplomatic panel and request peace. This view makes up the bulk of your play so be prepared to stare at a map and carefully plan and manage every aspect of your empire for hours at a time.

For the first time in the Total War series, attrition will play a part in the campaign. Your armies will lose men due to extreme heat or cold. If you’re in the deserts of Egypt or the freezing tundra in Russia you are going to start losing men, this is counterbalanced by allowing lost troops to replenish when in friendly territory.

The monotony of the political side of the game can be broken up by entering into a battle and this is where Napoleon: Total War excels. As you might expect this occurs when your army meets an enemy on the map. Once you clash you will be able to choose a few different actions, you could choose to automatically resolve the battle, this involves the computer running a simulation to determine who would win, there is no player involvement here and from my own experience this option will cause much greater losses to yourself than if you were to fight the battle manually. If you did choose to fight the battle manually, you enter into the the real-time strategy element of the game, you can see your troops in their units on the battlefield, you position them and control their aiming and stance. You outmaneuver the enemy and attack using any tactical advantage you see fit.

These real time battles are where we see the majority of the improvements that Napoleon: Total War brings to the table. The physics engine has been updated to allow cannon balls to leave impact craters when they hit the ground, gunpowder smoke from your cannons or musket fire remains on the battlefield subsequently reducing visibility. Various environmental conditions will have an effect on your battle, if it rains your gunpowder may backfire and the elevation of your units will affect the range of their munitions.

As mentioned earlier, all of the above is very much common knowledge to fans of the Total War franchise and the changes are so minor that only the most dedicated of those fans will notice the difference, to anyone else they might as well be playing Empire: Total War.

If you invest enough time you will notice how those small improvements affect your game and you will appreciate them more.

Napoleon: Total War follows the saying, “If it isn’t broke, don’t fix it” and provides a mix of intense combat with the stress of running an empire for an overall enjoyable and rewarding experience.

The port is not perfect and I encountered a few problems. When running the game in the 2560×1440 resolution (which is the default resolution for my iMac) there are large black borders surrounding a very tiny screen area. Secondly, I experienced a frame-rate drop multiple times when moving troops on land or sea.

The game itself looks great and is similar to other strategy games released around the same time. The audio quality is also very good and there were no problems with audio playback.

At the time of writing I could only access a local network mode and therefore I cannot comment on multiplayer currently.

Napoleon: Total War Gold Edition includes all the DLC from the original version of the game:

The Peninsular Campaign – Introduces a new campaign mode set in the Iberian Peninsula between 1811 and 1814 as well as adding 28 new units and a new playable faction.

The Heroes of the Napoleonic Wars Pack and The Imperial Eagle Pack – Adds a total of 21 units to each of the playable factions.

The Coalition Battle Pack – Brings the Battle of Friedland to Napoleon’s Wars along with a total of 6 new units for the playable factions in the game.

There are a vast amount of mods available for Napoleon: Total War, many of these add new units or campaigns to the game, for example the Hispania Mod adds a campaign across the many regions of Spain and is set through 1808 and 1814.

I cannot currently confirm whether mods will work for the Mac port, a lot of the mods for Empire: Total War were confirmed working on the Mac so expect similar results after some time for Napoleon: Total War.