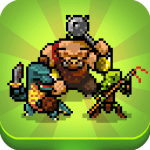 A game that lets you take control of a group of people playing a pen & paper RPG, featuring pixel…

Knights of Pen and Paper started life as a popular “casual” RPG on mobiles. It levelled up a bit (gaining a +1 edition) and became available for desktop systems. Unlike many of the other games that attempt the same transition, Knights of Pen and Paper (KPP) has an interesting concept, one that perhaps makes it ideal for us office chair-bound, immutable gamers.

I want to address the elephant in the room first: the game’s in-game currency can be bought with real money (through in-app purchase in Steam), and the game itself is not particularly cheap.

The thing about this is, it seems to be completely unnecessary.  At no point did I ever really want for more gold (of course, there’s always more stuff to buy, but I never felt that I was being held back by not having enough currency), and if anything, the game seems ridiculously easy enough as it is. That said, I think the mere presence of the “buy more gold” button on the screen the whole time is completely to the game’s detriment, kind of like the stings TV stations love to splash over the top of  painstakingly produced TV shows, advertising other TV shows. You might be completely put off by it, you might not mind, or like me, you might just eventually get used to it. But to be clear, it has no impact on the game.

So what of the game? Well it’s an RPG, of the sort popularised in Japan in the late 1980s. You have a party of characters, equip them with various doodads, level them up, and have them participate in turn-based combat. There are really only two parts to the gameplay (dungeon mini-games aside)– choosing how to outfit your party in terms of skills and items, and then having them use them on an assortment of different critters.

You can choose what to fight where, and the game hints as to the recommended character level to take on particular areas, and in an interesting twist, lets you choose the difficulty level for each fight by allowing you to specify the composition and size of the enemies you’ll face for most battles. Fancy a challenge? Throw an elite and some higher level monsters. Finding it too difficult? Fight one low-level enemy at a time, or go and “farm” some low level areas. The game helpfully shows a difficulty meter prior to each fight so you know what you’re getting yourself into.

There’s a primary “story” quest line to follow, but you’ll have to supplement this with random quests in any case so that you’re able to gain enough experience to be of an appropriate level– you might earn enough experience after completing a story quest for your gang to advance a single level, only to find that the next quest requires a party of 4 or more levels higher. This is probably where complaints of having to “grind” for experience come into play, as participating in the additional battles feels unnecessary. It’s interesting to me that a big part of the reason this feels like a grind is that it’s so optional and directionless; I’d have much prefer it if there were clearly defined “optional sidequests”, rather than the “go off and fight for a bit and then come back” attitude the game takes with you.

The battles themselves involve taking turns to have your characters use abilities (such as an attack, a skill, an item, or to block) in an effort to whittle down the enemy. There’s not an awful lot of decision-making here, and it’s certainly a much more sedate affair than the equivalent battles seen in something like XCOM or Expeditions: Conquistador, but it’s engaging enough to keep you mindlessly clicking through battle after battle without getting bored. At the end, you’re rewarded with a bit of gold and some experience (that gets shared between surviving members of your party). I didn’t generally find battles all that difficult though (even when maxing out the difficulty meter), and even though I was regularly having party members get killed during battles, they were resurrected cheaply enough afterwards that I was able to breeze through the game at a fairly brisk pace.

The whole game is wrapped in a sort of meta-setting, and herein lies the game’s key appeal, the thing that intrigues and captures your imagination.  The characters you control are warriors and wizards in a pen-and-paper RPG being played by regular people (everyone from a hipster to a grandmother), and the quests and so on all reside in their collective imagination (presided over by a games master), with actual 20-sided dice rolls taking place to determine outcomes. The characters you pick don’t really seem to have much impact on the game itself (other than a passive bonus, such as +1 to attack for the “Jock” character) and their occasional quips. But having this setting does ensure that the game never takes itself seriously, and the mildly amusing humour (think weak groans rather than belly-laughs) is welcome in the otherwise uninspired game mechanics.

Honestly, it’s ok. Overall it’s mindless fun of the sort that probably is better suited to more portable, less demanding devices, rather than something you’ll want to lose yourself in, min-max your way through, or hope to make you feel challenged or inspired. It could have been that game, of course, but somehow it feels wrong to point at it and accuse it of having failed to live up to some imagined expectation. Approach it with the right expectation, and you might come away suprised, but don’t make the mistake of thinking that you’ll get the same out of it as you would a more traditional RPG.

The game really isn’t really designed for full-screen. It’s pixel art, of the sort which looks gorgeous when it’s on a bite-sized display, but when blown up to fill a monitor, it looks more like a stack of lego in a vague approximation of a game. Run this in a window.

Much more serious are the lack of affordances to take advantage of a mouse and keyboard-driven interface. There are no tooltips on any of the big chunky buttons. There’s also no tutorial to explain how to find your way around the interface or what any of the buttons do. I can only assume that was deliberate, but it feels utterly wrong in this context.

Last updated June 22, 2013 Details of everything we received from publishers as part of this review are available on out integrity page
Gameplay Video
Mac Game Store Steam