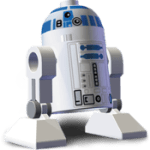 Although several other Lego games have been made since, Lego Star Wars Saga remains one of the best, finding that sweet spot between accessibility and complexity. That, and there's also a lot of game to enjoy in this package.

The gameplay follows standard Lego game fare: you control a bunch of Lego “minifigs” who run through various levels smashing everything to bits and collecting Lego studs. Different characters have different abilities, so some characters shoot blasters and have grappling hooks, others use lightsabers and the force and can double-jump. There’s some rudimentary puzzle solving involved, but it really can be considered a platformer, although not a very good one.

For starters, you really have to play this with a controller. Some parts of the game require you to respond quickly to events, and there’s no way to skip past the trickier bits. Probably the biggest annoyance is the camera. The camera is fixed, switching viewpoints depending on where you are in the scene. This gets tiresome very fast, and it can be very difficult to perceive the relative distance of things on the screen, which is especially troubling when working through some of the harder platforming sequences. You’re also at the mercy of the game to decide which characters you get on a given level (in story mode), which becomes a problem when you have to use a character who moves very slowly. The tutorial such as it is is very anaemic, resorting to flashing brief text prompts on the screen the first time you encounter a new game mechanic (or often, nothing at all). You’ll find sequences where you die over and over, each time losing more of the precious studs you collected.

That said, it’s hugely entertaining. Running around smashing things to bits is very cathartic, and to compensate for all the wanton destruction, you’ll also use your force powers to plant and grow trees, make tables and chairs dance, and generally tidy up the place for bonus points. There are also mini-games such as a pod racer and turret sequences, which help the game feeling well paced. The game is also very funny, particularly the second half where Traveller’s Tales clearly found their stride. There are various cutscenes which reenact familiar sequences from the Star Wars franchise, often with a humorous twist (there is no spoken dialog at all).

Once you’ve completed a level for the first time, you have the option to replay it in “free mode”, taking a selection of characters you’ve unlocked so far. It can be rather entertaining to run around Mos Eisley with Darth Maul for example. This also gives you the opportunity to score more points (with which to unlock extra characters and other goodies), but more importantly it allows you to try and find every secret hidden around the level (there are hundreds). On a given level, there will be red and gold bricks and “minikits” to find, which are themselves used to unlock further bonuses.

Although several other Lego games have been made since, Lego Star Wars Saga remains one of the best, finding that sweet spot between accessibility and complexity. That, and there’s also a lot of game to enjoy in this package.

Generally speaking, the game runs very well. The block-like nature of Lego bricks means that there’s no appreciable problem with the low polygon count or basic textures. We didn’t encounter any frame drop, although there were some minor issues with shadows.