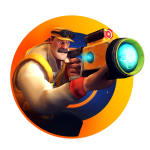 On the surface, a run-of-the-mill puzzle-platformer, a few minutes spent with Rochard reveals it to be something rather special.

Originally released for the PlayStation Network, Rochard seems to have elements of Portal, the Xbox Live Arcade game Shadow Complex, and the iOS game Space Miner (all of which are great). The game is in 2.5D, in that the environment is 3D, but you can only move in 2D space. The story concerns astro-miner John Rochard’s efforts to keep his crew alive (and employed) as their base becomes overrun with malfunctioning machinery and space bandits.

At first glance, it’s a basic platformer with a couple of neat gimmicks. Rochard can make use of his G-Lifter to both lift and launch heavy objects, and also reduce gravity in the room. As the game progresses through its 5 chapters, you’ll accumulate numerous upgrades for the G-Lifter, and use them all to solve numerous puzzles and defeat the increasingly deadly enemies throughout the base. Rochard can’t take much damage (especially at the start), so you’ll usually try to use the environment to defeat them. For completionist gamers, there’s also plenty of “gold collectables” to find, many of which will require some lateral thinking.

There’s a few nice twists to stop you from feeling like you’ve seen everything before, such as inverting the rooms on occasion, and its a really pleasurable time sink. When Rochard jumps across the screen in low-gravity, it feels completely divine.

The graphics can seem a bit lacklustre, as there’s not much detail, but that’s fine. The game runs perfectly, even at Retina resolution (though the GPU will get pretty hot) and we didn’t encounter any issues whatsoever. The sound is also pretty good (if a little bland), with Rochard voiced by the venerable Jon St. John.

As a bonus, there’s all sorts of great concept and fan art over at the game’s official website.