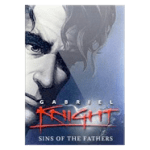 The first of three games to star Gabriel Knight, it was originally released in 1993, at the peak of the point-and-click adventure genre. The plot sees the somewhat misogynistic Knight researching a series of voodoo-inspired murders throughout New Orleans for a new novel. Before long, he starts to investigate his own family history, with the storyline culminating in two possible endings.

The gameplay is old-school point-and-click stuff. You choose from a series of icons to interact with the environment. It does suffer from many of the frustrations of adventure games from that era, mainly that there is little indication of which parts of the scenery can be interacted with (made all the more problematic by the low resolution of the artwork). There are also far too many actions to choose from (there are 8 action icons, plus whatever you carry in your inventory), and even though you can cycle through them with the right mouse button, it can become a bit of a chore. The puzzles are reasonably logical for the most part, although you can often find yourself at a loss to know what to do next. But that said, the story is very well told, and the dialogue (which is fully voiced) is interesting enough to make up for the other shortfalls.

Graphically the game doesn’t score many points in full-screen. The low resolution is compounded by many of the scenes looking very cluttered, and so it’s advisable to play in a window for the most part (interestingly, the conversations look great even when scaled up). The sound is reasonable, you’ll hear some audio distortion during dialogue, and to be honest, we quickly tired of the voiced narration (which kicks in every time you interact with anything) and disabled it.

How to get it to work

This game requires the free Boxer application in order to run on a Mac. Follow these instructions to get it working:

Last updated June 19, 2013
adventure gog.com horror point and click
Details of everything we received from publishers as part of this review are available on out integrity page
Gameplay Video
Gog.com