Some of the best games ever made came out in the 80s and 90s, before Windows or OS X. They ran in DOS, in a limited resolution, but that didn’t matter. They were great.

Thanks to gog.com, many of those games are available to buy. And thanks to Boxer, you can run them, hassle-free on your Mac.

Boxer is built on DOSBOX, which emulates the MS-DOS operating system. That means the games run in exactly the same way they used to (even with some enhancements thrown in), so you can enjoy them as they were originally intended.

But Boxer takes things a few steps further, making it an extremely “Mac-like” process. First of all, you “install” a game by opening boxer, and dropping the folder (or disk image, or CD-ROM) onto the Window. It then scans the game in order to identify it. According to Boxer’s author Alun Bestor, it will automatically identify around 200 games itself (assigning the game’s name and icon), but “that 200 is nowhere near representative of how many games are compatible out-of-the-box with Boxer”. Assuming your game isn’t one of the 200 that are detected (or even if it is), you can set the name and artwork yourself. Boxer then creates a bundle for the game in your applications that you can run just by double-clicking it, just like a regular Mac OS application. 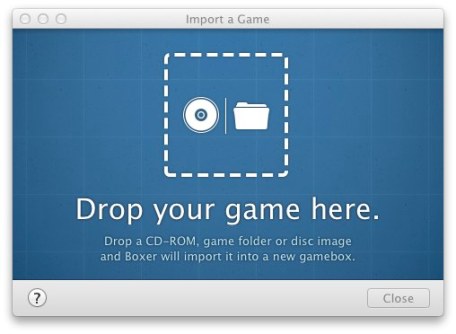 Boxer can be downloaded for free, is updated regularly, and if you get some use out of it, do consider donating some money via PayPal to Alun for his great work.