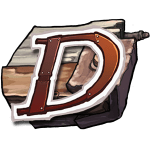 Rufus, the not-quite-hero of Deponia is a bit strange. Kind of an arrogant, whiney dolt (think Homer Simpson without the charm), he's nevertheless able to build rockets out of household parts whilst cracking (at times confusing) jokes, all the while on a mission to win the affection of a sort-of angel. You'll either love him or… turn the sound off.

The game is traditional point-and-click, but greatly streamlined. The mouse cursor changes to show what each mouse button will do when over a valid object. For instance, it will change to show a hand icon as a primary (left-click) action, and a eye icon as a secondary (right-click). On top of that, you can also interact with inventory items. That’s really all there is to it, and all a point-and-click adventure game needs. There’s even a (sadly unskippable) tutorial to ensure you really understand the process.

As one of the only adventure games to be fully realised in HD, Deponia is beautiful. With a Don Bluth quality to it, the artwork is clean and vibrant, and the animation sound. However, it suffers in its translation to English from its original German. You can forgive the fact that the lip-sync is out on all the dialogue, but it’s harder to forgive the often wonky dialogue itself. The actual translation of the words seem to be top-notch (as does the voice acting), but the meaning of a lot of it is clearly lost somewhere along the way. As such, some mental gymnastics are required to figure out the intent of some of the dialogue, as well as solve the puzzles themselves.

There are other annoyances, such as having to do rather a lot of backtracking (there’s no way to increase walking speed, meaning that you sometimes have to sit and wait for Rufus to complete a long journey from one side of the screen to the other), and there are also some bugs in the current version. It could probably have benefitted from an autosave, but this is a minor gripe.

That said, once you settle into it and fully engage with the gameplay, it’s quite a fun ride. The world is beautifully realised, the story is entertaining, and the puzzles aren’t really too taxing (although translation issues seem to require having to trail & error your way through some of them), and the audio is good. It’s all very light-hearted, and even if it isn’t as funny as it should be, it’s worth a look if you’re a fan of the genre.

Deponia seems to run at a deliberately low frame-rate, and so it isn’t particularly taxing on any hardware. There is a bit of a delay between switching from the game proper to the menu (to save and load for example) but otherwise everything seems as it should be.

The current version has some game-breaking bugs (where you can get completely stuck and have to force-quit and reload before taking a different approach), which will hopefully get fixed soon, but coupled with the translation problems may be a deal-breaker for many. There are reports of people being unable to get the game to launch, but we didn’t experience anything of that nature. There also seem to be a lot of issues with subtitles, for instance on at least one occasion the German subtitle was displayed, and many others were mis-spelled or different from what was actually said. At another time, Rufus’ mouth was moving, there was a subtitle on the screen, but no actual speech.

As a side note, the game supports Steam achievements however these do not work. According to the developer, this is a fault with the current OS X version of the Steam client, and as such will hopefully be addressed by Steam in a future update.