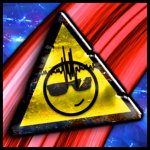 Beat Hazard started life on the Xbox Live Arcade, gaining popularity and biding its time in order to make the jump to other (better?) platforms, adding some extra features along the way (hence the “ultra” suffix in this version). You control a tiny space ship adrift in space, under threat from many other ships, missiles and lasers, asteroids and huge gigantic ships seemingly  made from missiles and lasers.

All of this destruction and hostility is set to music– here comes the hook– your music. You configure Beat Hazard to scan through your library (or alternatively, pick a track via the Finder, or use a pre-configured Internet radio station) and let it be the soundtrack to your destruction. There’s more to it than just having the music play in the background though. The timing and movement of the enemies you’ll face is based upon specific characteristics of the track being played. Play the same track over and over and you’ll be able to learn the patterns (thus improving your score). Play a new track, and it feels fresh again, with new arrangements to anticipate.

Gameplay is typical top-down twin-stick shooter stuff: you control your ship’s position with one set of controls, and aim and fire with the other. You collect power-ups from destroyed ships, which will improve your weaponry as well as give you one-shot items like shields and nukes. There are also power-ups that increase the volume (both audibly and visually), and cash to collect (which can be spent on perks between levels).

There is an assortment of different game modes too. “Boss Rush” for instance will just play songs without stopping (or until you run out of lives) but you’ll only fight against the massive boos ships. “Chill out” gives you infinite lives, so the music never stops. There are also a variety of ways to tweak the difficulty on every game mode to give yourself enough of a challenge.

Currently the game does not run on Retina-enabled MacBook Pros, but the developer is working on a fix. Aside from that, the game runs very well on all systems (some sort of controller is recommended to get the most out of it). The game has been known to crash when indexing tracks on occasion, but in general you can head over to the official FAQ if you have any major issues and contact the developer directly.

There’s a setting for visual intensity, so you can scale up (or down) the effects as you like.

Local and online multiplayer options are available, whereby you can either compete against or co-operate with someone in order to get the most points. However, you’ll only be able to play tracks that both of you already have.

The Steam version of the game has two optional DLC (both are included in the Mac App Store version):