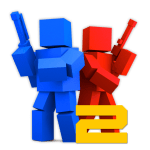 With the release of Cubemen 2, tower defense is cool again.

When I reviewed Cubemen last year, I found it to be a solid tower defense game with a few neat twists. It was good, certainly above mediocre, but not brilliant. With its sequel now available, I took another look, expecting more of the same.

The premise of Cubemen is that you have a base (more of a telegraph pole, really) and some cubes. The base must be protected from waves of incoming aggressors, and to do so you create towers, nee cubemen from your treasury of cubes. The “killer feature” as it were of Cubemen is that they can move after you’ve created them, meaning you can adapt to changes in enemy patterns, or make a slow land-grab over the course of a level.

Different cubemen have different abilities, for example, Grill has a nondescript pistol, low health, but moves faster than Rocky, who shoots homing rockets. The aim is simple, and true to the tower defence formula: you must prevent the enemy’s assault on your base, and every enemy destroyed earns you more cubes. The previous game was well-executed, and reasonably fun, but would end up feeling stale due to the way it would make more sense to just keep churning out cheap units and using them as cannon fodder.

This time around, everything clicks into place perfectly, like a grown man stealing a baby’s shape sorter and wondering what the fundamental issue is. Stupid baby. But clever 3 Sprockets, who have turned an interesting idea into a great one. Crucially, they’ve stolen some good ideas from other games in the genre. As probably anyone could have predicted, an upgrade of a tower defense game means that upgradeable units are mandatory. And in Cubemen 2, each of your cubemen can be upgraded, giving them incremental improvements to taking and dealing damage, fire rate and range. Nothing revolutionary, and in truth, it doesn’t make much a difference to the overall experience, save for a few levels with limited space or chokepoints.

What is an important though is the addition of two new units, Waly and Milo. Waly doesn’t do anything. He walks to a spot and turns into a wall. Really important unit that. Crucial. Milo walks to a spot and turns into a landmine. Milo won many games for me. Both are the cheapest unit in the game, which means you don’t need to think of the others as cannon fodder so much, which means you can appreciate the value of each of them, even if their respective roles are not perhaps as clear (laser-wielding Lazlo is not particularly indistinguishable from sniper Sid) as they should be.

Other enhancements are that there are now teleporters, crate drops and health stations on some maps. It’s not quite as crazy as Worms, but it looks to be venturing into that territory. Not that that’s a bad thing. You can also pick specific targets for your cubemen if you want that level of micromanagement, but in truth the pacing of the game feels tight enough that there’s plenty to keep you busy, whether its blocking points of entry with Waly, looking for new vantage points, or collecting crate drops. There’s still the issue that you can get overwhelmed and, with no cubes left to spend, be unable to do anything about it. But the availability of cheap Milo units means that you’ve at least got a fighting chance if you’re down to a few cubes near the end of the wave.

So that’s the gameplay, but what of the trappings? The interface is improved certainly, it’s a lot cleaner and easier to read. The unit and level skins can be changed to those included in the base game, or via in-app purchase. You can have your cubemen look like cowboys and have them roam around levels that look straight out of Minecraft. There’s also a tutorial and a campaign this time around, although the campaign is really just a string of otherwise forgettable levels. What is a real joy is the community-created levels which are easily accessible, with ratings, leaderboards and so on. It’s incredibly well integrated to the base game, and though 3 Sprockets’ maps are well-designed in their own right, you’ll have no problem finding maps to enjoy. Naturally there’s a level editor too, and it’s about as easy to use as possible.

Each level has a number of different modes available, with single-player only “classic” (standard tower defense) and “rescue” (sees you protecting a stream of vulnerable units); as well as “skirmish” (where your base pumps out units that head straight for the enemy’s base whilst you must still defend your own), “capture the flag” (where you build a special unit to capture a flag) and “territory” (where you try to dominate by “painting” as much of the landscape as possible).

There are many, many games in the tower defence genre, but next to them all, Cubemen 2 stacks up beautifully.

The game feels like it was built for the Mac. It runs smoothly, without any sort of glitches or quality issues. There was an issue with achievements, but that seems to have been fixed now.

The only negative remark I can really make about the game is that the music (one track on a loop per game type) is extremely repetitive.

Up to 6 players (in teams or individually) can play Cubemen 2, with or without bots. As I write this, there are on or two public games available to join, and several private ones.

DLC is available in the form of new skins. Frankly, the base game is so cheap, I’ve no problem with 3 Sprockets using such a business model. That said, there was a bit of an outburst from the playerbase about it, which 3 Sprockets responded to the situation with complete decorum and made it all available for free during the first week of its launch.

Last updated June 19, 2013
mac app store steam tower defence
Details of everything we received from publishers as part of this review are available on out integrity page
Gameplay Video
Mac App Store Steam