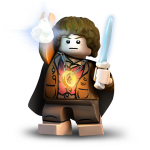 The (by my count at least) 11th Lego game in the series (and the tenth ported by Feral Interactive) is an odd thing. It blends together platforming, quick-time events and fighting with RPG-style quests, crafting, and smashing up blocks of Lego for your own amusement (and points). Somehow, this bizarre concoction works.

Feral Interactive seem to have taken to announcing their games by springing out of cupboards, yelling “surprise!” and then hopping away. Well, we were certainly taken by surprise with their announcement of Lego Lord of the Rings, which is coming to Mac next week.

The latest flavour of Lego games lets you guide the Fellowship through a series of levels based around Peter Jackson’s trilogy, and features the music, voice overs from the films, as well as the usual Lego humour. Rock, Paper, Shotgun’s Adam Smith said of the Windows version: “If you are happy to spend hours of your life exploring a small and lovable Middle Earth, smashing things and seeking out simple puzzles, then you will find Lego Lord of the Rings to be exceedingly generous”.