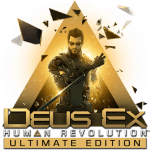 The successor to one of the most beloved games ever made, and a fantastic RPG in its own right, Deus Ex HR worked hard to create a compelling universe, intriguing story, and even managed to pose some ethical questions along the way. Mature without being gratuitous, it’s a game about options. The game itself was so deep, it took us nearly a year to review it.

The game run pretty smoothly, and it won just about every Apple accolade possible. The only thing that really let it down were the slightly immersion-breaking thought of the protagonist sneaking around his own workplace, and the much more immersion-breaking “boss fights”, seemingly displaced from another game entirely.