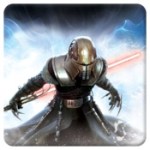 Lightsabers and force powers are some of the tastiest ingredients found in the Star Wars universe. In The Force Unleashed, they are mixed together with a delicious story, and sprinkled with enemies of all descriptions, giving you a wonderful playground to run riot in.

The story is set prior to the events of Star Wars Episode IV, and sees you take on the role of Darth Vader’s secret apprentice, “Starkiller”. You control the apprentice from a third-person perspective as you make your way through a series of levels, armed with a lightsaber and the ability to “force push” various objects. Later on you’ll develop other powers such as force lightning and lightsaber throwing, but by far the most useful is the ability to use the force to move objects around. Sadly this also proves to be the most frustrating power to use, both because the control scheme leaves a lot to be desired (especially when using mouse and keyboard) and because you’ll remain immobile (and therefore susceptible to damage) whilst using it.

There’s a system of upgrades that can be used to improve your powers and lightsaber as you see fit, and there are also various power-ups that provide temporary boosts scattered around the environment. The difficulty throughout the game seems to vary tremendously (an otherwise spectacular set piece towards the end is particularly annoying), and most boss fights require quick-time events to complete, which makes them feel a little unsatisfying.

The game does allow you to unlock new costumes and difficulty modes as you play through (there’s a menu where you can input a secret code to unlock a bunch of stuff at any time if you’re impatient), and perhaps the best fun of all to be had is playing the game for the second time, with a fully upgraded character able to wreak complete devastation everywhere (if you’re so inclined, you can also play through the game with a different character skin, such as C3-PO).

Aspyr have taken to feeding a carousel of their other games into their launcher, which unfortunately means there’s an irritating delay between the launcher loading and actually being able to start the game. There’s also the option to use a 360 controller, but it didn’t seem to work. We also encountered some crashes, but but these weren’t particularly frequent.

Graphics settings are sparse, with only a toggle between low and high detail and a resolution setting. There’s some texture pop-in and some of the animation looks a little odd, but that’s probably endemic of the age of the game rather than an issue with the port. There’s also an apparent issue with the audio mix, as certain snippets of incidental music and sounds seemed very low, with other parts sounding rather loud.

The “Ultimate Sith Edition” includes all the DLC released to date, which essentially comprises some new levels (and storylines) as well as various different character skins.