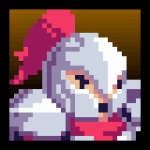 Some games have such a strong concept, that it doesn’t really matter if they’re highly polished, or even well-executed. Rogue Legacy is such a game.

It’s first and foremost a platformer, but with randomly-generated levels. So it occupies the same neighbourhood of gameplay as does 99 Levels to Hell, and indeed, almost everything about 99 Levels also applies to Rogue Legacy. If we were to judge it in this context though, we’d undoubtedly come away disappointed. The platforming aspect is completely lacking in almost every respect, with the controls (at least in the Mac version) feeling somewhat weightless, the overall physics and movement of everything erring on the side of being floaty rather than tight and focused, and there’s a reliance on making use of a downward attack which is clumsy at best, and then there are the weapon and jumping arcs which behave nothing like how you might expect. Don’t get me started on the fact that enemies will attack from off-screen, or that the aforementioned downward attack has a terrible tendency to activate the paintings on the wall which then attempt to kill you by wildly spinning around, even clipping through obstacles.

I have said it before, and it bears repeating, I am not a fan of the platforming genre. I suck at it, and suck badly. I lack the patience for it. But even so, I can appreciate when the platforming has a good feel to it, as it does in Super Meat Boy, but I just didn’t get that feeling from Rogue Legacy. I expect others will not have this problem, and will learn to anticipate the different attack patterns of each enemy type, as well as their character’s own attack range and jump distances. As for me, I died, quickly, frequently, and with gritted teeth each time.

Being as it’s a roguelike, death is permanent, and necessitates a restart of the game from the beginning, but with a newly randomised level layout. The designers of the game expected you to die a lot, and seemingly unbelievably have catered to the needs of players like me who insist on repeatedly leaping out of one set of spikes onto another.

You see, beyond this platforming fare, what Rogue Legacy does is steal the central metagame mechanic from Infinity Blade, in that when your character is inevitably defeated, you get to play again as one of your character’s “heirs”, with slightly different skills and abilities, but with access to all the buffs you’ve unlocked so far.

With this, Rogue Legacy becomes quite interesting, and the sins of the main game itself, namely the terrible platforming aspects, melt away. Each run you’ll accumulate gold, and this gold can be used by your next character to become a bit tougher, a bit better equipped. There’s something poetic about that, isn’t there? You try to play the game as best you can in order to make your next game that little bit easier.

And so it goes. You run through the castle, bashing enemies and candelabras for gold, avoiding traps and maybe even collecting the odd blueprint or magic rune. Then you die, and you pick a new character (each of which has a set of positive, negative or cosmetic traits, and the sheer variety and imagination offered by each is truly stupendous) and spend all the money you accumulated to increase your maximum health or unlock some new bit of equipment to use. Then you do it all again, try to get that little bit further, to collect a little bit more gold to unlock ever more powerful stuff.

Except… well, eventually you might hit a wall, as I did. See, there’s a mechanism in place to stop you just being rewarded for simply playing the game, which is that every time you re-enter the castle, your gold is reset to 0. This undoubtedly helps with the pacing in early on, as you’d just keep accumulating wealth and therefore power even if you don’t get very far. But later on, when you’ve unlocked a bunch of stuff and the next tier of upgrades all cost more than you can earn in a single run, the game starts to feel a bit draining. You find that your actual skill at the game hasn’t really improved all that much, even though you’ve been making more progress. All of a sudden, you’re playing a completely different game, perhaps something like Spelunky, where the only way to progress is to simply become better at the game. Because of the aforementioned issues I had with the main game, for me, I started to resent playing it, that making a run without collecting enough gold to unlock anything was simply a waste of time.

Then I scrolled through the long, long lineage of all the characters I’d played, and it seems undeniable that I certainly got enjoyment out of it. I guess there’s something oddly rewarding about taking stock of all your failures. Were I a different gamer, I’d undoubtedly be compelled to keep at it, reach the end. Maybe you’re that gamer, and this is the game for you.

While the Mac version of the game is certainly playable, it’s compounded by a number of technical issues. We experienced issues when you have multiple controllers attached, and even with that resolved, disconnecting and reconnecting a wireless controller caused it to stop working (though to be fair, this seems to be a common complaint with some games since Mavericks was released). The game also hangs on exit, necessitating a force-quit to properly exit it (reportedly this is an issue with MonoGame-based games running in Steam).

Visually the game’s not exactly pretty, having very much a low-budget, 16-bit feel to it.

Last updated January 6, 2014 Details of everything we received from publishers as part of this review are available on out integrity page
Gameplay Video
Gog.com Steam