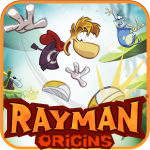 A 2D platformer starring limbless hero Rayman is a tour de force in visual expression and abundance of gameplay.

I’m really not a fan of platformers. There are exceptions to this of course, games where platforming is only a side dish to the main gameplay being served up (although strangely I thoroughly enjoyed Super Meat Boy), but in general I’m too old, there are too many other games that I can get enjoyment out of without having to endure endless frustrations and repeating the same bloody actions over and over again. It was my hope that Rayman Origins would be one of those rare platforming games that I’d enjoy. Ultimately, I did not.

But I’m going to recommend it anyway.

If, like me, you have only the vaguest of ideas who this Rayman character is, you’ll perhaps be pleased to know it doesn’t really matter. The story, such as it is, is utterly nonsensical to the point where it was clearly conceived by throwing fridge magnets at a bridge, but doesn’t really matter, as it seemingly exists merely to provide a reason to feature wacky character designs, animation, and lots of bright colours. To say that Origins is a colourful game is something of an understatement, as there have been big budget Disney movies that had less going on. It’s gorgeous; I spent more time just enjoying the feeling of playing an interactive cartoon than anything else, which is rather wonderful when everything else strives towards photo-realism.

But the game. It starts off innocently enough; you take control of this rat-like creature with hands and feet but no arms or legs, and run him from left to right. It’s all very familiar, but several things make it work better than your average platformer.

First is the level design. Like recent Sonic The Hedgehog titles, the levels are designed with different possible routes. There’s always a completionist route, where you try to get to those almost-inaccessible corners to grab Lums, which are unreasonably happy golden blobs that will sing on occasion, melting the most scrooge-like hearts, and act as a sort of score. Or you can take the easy route, just try to mainline it for the “exit”, or if you’re so inclined, to speedrun it (I put “exit” in quotes there, because it’s an massive eyeball you punch out of the way). The other brilliant thing about the levels is that they’re incredibly short. As much as I experienced my fair share of frustration in the game, and least it was never for long, and I could play the thing, one level at a time, in short bursts.

And god help me, I played them all.

The next thing Origins does well is that is doles out new things at a steady, but rapid rate. First you’re limited to the basics, running, jumping, punching. Each set of levels, it seems, bring something new. You gain abilities to hover, bounce, shrink, and well, I don’t want to spoil anything. Unfortunately (for me) this also means that each level demands more of you. What starts out from a pedestrian romp from one side of the level to the other quickly escalates to bringing back bad memories of learning to salsa.

There are other diversions too. Every so often you’ll get a much-needed break from the running and jumping action to fly about on a mosquito which are actually a great deal of fun, featuring a very odd system whereby you can alternately inhale and then shoot other beasties.

You can also unlock different skins to replace the default Rayman as the game progresses, as well as unlock extra levels where you try to catch a fleeing treasure chest (which I’d consider thrill-rides if I didn’t suck so badly at them). And of course, you can do that stuff that dedicated platform-enthusiasts love: replay everything to perfection and unlock even harder challenges.

So yeah, it’s not I game I enjoyed as much as fans of the genre undoubtedly will. But I’ll be damned if I can think of a better game to load up on Christmas morning, mug of hot chocolate (with cinnamon, mmm) in hand, wrapped in a blanket with this never-ending storm battering our tiny island, and pretend like I don’t have a small baby or some insatiable in-laws to attend to.

I had absolutely no issues with the performance of the game whatsoever. Put it side-by-side with the Windows version and you’ll not spot any differences, which may or may not be due to the fact that it’s entirely 2D. And it’s 2D at it’s best; a focus on solid design and animation unlike anything else, with a fabulous soundtrack and sound effects to match.

If you’re looking for a good-quality platformer to show off your Mac, look no further.

Last updated December 24, 2013 Details of everything we received from publishers as part of this review are available on out integrity page
Gameplay Video
Mac App Store Mac Game Store Steam Soundtrack available on iTunes