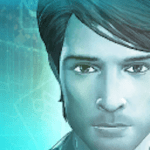 It’s only April and already I find myself reviewing my second kickstarter-funded point-and-click this year, a genre which I’ve decided I don’t really enjoy as much as I used to. Moebius: Empire Rising is significant for a number of reasons, not least of all that it was overseen by Gabriel Knight‘s author, Jane Jensen, which might be the sole reason why I have found myself spending a dozen or so hours playing another point-and-click adventure game.

It starts with a great deal of promise. The title sequence is extremely well-produced, complete with an original soundtrack and even a comic-book prequel included if you want to get up to speed on the backstory of the main character. Everything about the game’s opening moments gives it a great first impression, from the uncluttered interface, to the running score, suggestive of the fact that you could complete the game without having to have done everything.

But then some cracks start to appear. Most immediately noticeable is the way the character models are rendered. All the characters are in 3D, but it’s low-budget 3D and apparently there’s no lighting- the character models always look flat. Coupled with this is the slightly wonky animation throughout; there are some moments that seem well-animated (and I have to give the designers credit for opting to animate more or less every action), but then there are things like the main character’s walk, which looks somewhat awkward,  painful even, and still others which appear almost comical. Then there’s that uncluttered interface, which seems to have made concessions for touch-screen devices (performing any sort of action requires two clicks), as your right-mouse button won’t be needed for the entirety of the game– though I must stress, it’s not nearly as offensive as it was in broken age.

But, aside from various bugs (which I’ll come to later), after a while these are issues that you don’t really notice. Yes, the game has a tendency to look weird, but you’ll get the gist of everything, and be engrossed in what’s said and what’s happening as opposed to how things look. Yes, doing anything within your inventory is a bit of a pain, but is fortunately not required very often.

Then there’s the protagonist. Malachi Rector might be the most original character to be found in video games in recent years. Brusque, highly intelligent, frail, analytical and extremely aloof, there’s little to make Malachi likeable, except perhaps his rather dry sense of humour and unflappable honesty (and his inevitable softening over the course of the story). An antiques appraiser that doesn’t like to take his work home with him, successful enough to buy a home with a dream view that he doesn’t enjoy, and surrounded by people that he’s mean to (and who seemingly love him for it in return), he doesn’t suffer fools and values his privacy.

The story itself is intriguing, though if I’m honest it was a little too much pulp sci-fi for my liking, but there’s no doubt that the strong writing carries the weight of the entire game. The game itself is packed full of historical tid-bits, but it’s definitely the characters that make the game as interesting as it is. There’s no real branching of storyline or decisions to be made like in the recent Telltale games, this is old-school point-and-click adventure all the way, completely linear and with a lot to read (although it is mercifully, fully-voiced).

But it is an adventure game, and that means I need to talk about the puzzles. So the first thing to note, is that unlike other point-and-clickers, you can’t just pick everything up that you’ll use later. I’m not entirely sure what the thinking was behind this design decision, but there are plenty of objects dotted about that Malachi will simply state “I don’t need that right now, but I know where it is if I need it later” when you try to pick them up. This leads to a needless amount of pointless backtracking between locations when the time comes to actually use that item.

Generally, the puzzles are clear and have obvious, if not immediately apparent solutions. For me there was only a single moment that struck me as frustrating (one where I knew where I had to go, but not exactly what to click on to unlock the specific map location), although there were a few that seemed to defy logic (chartering a flight to buy a $40 bottle of whisky). Even the (apparently obligatory) code-breaking sequence is handled elegantly, with a screen providing information on different cryptography methods, as well as any possible key phrases you’ve discovered; and which will cross each of these off the list once you’ve tried them.

Malachi’s special ability, as it were, is to use his analytical skills to evaluate both objects and people, something that manifests as an action that can be applied to a great many things in the game-world; doing so starts a mini-game where you try to make deductions about people based on their behaviour or how they look by choosing from three possible options for each of a number of points. There are also case files that have a number of data points that you must match (or not) to other data, such as the engraving on the lid of a box to different engraving types, or some aspect of a person’s life to some other person. These are probably the most original aspects of the gameplay, and each of which are enjoyably cerebral.

There are more traditional puzzles, combining inventory items and so on, which are utterly unremarkable, but credit must be given for not making any of the puzzles obtuse (there’s dum-de-dum-dum, a maze of course, but it’s actually handled in a way that didn’t make me want to put face to keyboard). There was a single moment about a third of the way through the game, where one of the scenes spanned the screen, meaning you had to make Malachi walk from one side to the other to reveal more of it, something I that had not been necessary up until that point and didn’t occur to me to try for a long time (and then later on you can actually lose the game out of the blue).

There’s an in-game hint system that’s entirely useless; I suppose the thinking here is that if you get really stuck, well there’s the Internet. Much more helpful is the inclusion of a button that highlights all interactive objects on the screen, something I put to good use when I stumbled upon a bug that rendered one room completely black.

I really ought to talk about the bugs now. First the usual caveat applies: I reviewed a pre-release version of the game, so the chances are that by the time you read this, all the bugs will have been fixed. Most of the issues I encountered were annoying rather than game-breaking. There were occasions where the screen would freeze or turn green (usually whenever a Steam notification appeared), as well as rare moments where the mouse cursor would not go to the bottom of the screen; both of these were resolved by toggling full-screen on and off. There were also moments when there would be a long pause after issuing a command before anything happened, and the aforementioned room that only rendered the characters.

All told, there’s something like a dozen hours of game, much of which is enjoyable, and certainly worth a look if you’re a fan of the genre. It’s a cautious return to form for Jane Jensen, accessible but not really taking any risks or breaking new ground. Given its Kickstarter heritage, it’s probably just what the fans wanted.

While the quality of the audio is impressive, with both fully-voiced dialogue and an original sound track, the visuals are a little lacking, with seemingly low-budget 3D models and animation. There are several cutscenes which are heavily compressed and can be a little jarring as a result. As noted in the body of the review, there were several issues with the Mac version, but toggling full-screen on and off seems to resolve most of them.

Last updated April 15, 2014 Details of everything we received from publishers as part of this review are available on out integrity page
Gameplay Video
Mac App Store Gog.com Mac Game Store Steam