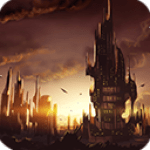 As the last of a murdered alien race, you must forge alliances with less advanced civilizations to bring peace to the galaxy in this turn-based grand strategy.

The rather whimsical backstory is that you’re the sole surviving Hydral, a technologically-advanced alien creature (that looks just like a mythological hydra) that’s been trying to bring peace by uniting the galaxy. Having stolen a prototype ship, you’re able to roam the galaxy, visiting its inhabitants and making a number of back-door deals for good or ill, with the long-term aim of getting all the races to join a federation.

In gameplay terms, you get a big strategic map with a number of planets, each the homeworld of a particular race. Each race is involved in its own struggle to develop- both technologically and economically. Even if you as a player don’t intervene in any way, the different species will play out their own version of a 4X strategy game- they’ll grow their population and fleets, change policies, trade, discover technologies, form alliances and go to war with each other.

So how exactly do you fit in? At any time, you can visit any planet and perform any of a number of tasks (though your available options will be entirely dependent upon the state of the galaxy, as well as how the race regards you). You can for example, do any of a number of “friendly” actions: help a race research a particular technology (and discover it for yourself in the process), or you can help them build their fleet. In addition to giving that alien some benefit, most of these will increase your standing with the race, as well as reward you with “credit”, a universal currency to allow you to perform yet more actions. Conversely, you can opt for “hostile” acts, such as stealing a technology that race has already researched, or sabotaging some installation. I can’t stress just how many different options there are available by the end of the game, though many of which will require you to go into battle.

The combat is arguably the weakest part of the game. It’s turn-based, with you plotting your ship’s course, choosing which weapons to use, and selecting targets (or just using auto-targeting), and then watching the next couple of seconds play out. Your enemies will be doing the same; there’ll be a lot of other ships trying to take yours down (possibly one or two trying to help you out) as well as fixed structures with a well-defined cone of fire. You can plot a looping course (all the action takes place in a 2D plane), or come to a stop (momentum will play a part though) in order to divert power from engines to other systems.

The ability to divert power is a nice touch; basically you have three systems: engines, shields and weapons. Increasing power to your engines means you can travel faster (and hence further in a single turn). Powering up weapons will give them greater range and greater damage, whilst boosting your shields means you’ll take less damage. In theory, at least. In practice, it seems that even with fully-powered shields you can take enough of a beating to kill you in a turn or two (which is game over), so the best thing to do wherever possible is simply power your engines, get out of range, and then power up your weapons so you can annihilate anything before you’re within range of their weapons. This is a strategy that will work for the vast majority of battles, the only exception being those that continuously spawn enemies (update: see below).

Another issue with the battles is that the choices you make don’t really seem meaningful. You can carefully pilot your ship to get in behind your enemies and anticipate their next move, or you can just fly straight towards them; either way, your weapons are omnidirectional, and all ships seem to take the same amount of damage regardless of where they take damage, so in the end the only purpose for plotting a specific course is to make sure you don’t stray too close to something. You can also choose which ordnance to install on your flagship, but each weapon is effective against different types of enemy, and because you don’t really know what you’ll be up against ahead of time, because you can only use one weapon at a time, and because the game helpfully tells you which weapons are most effective against which enemy when you hover over them, it absolutely doesn’t matter which weapons you pick. Indeed, I played the entirety of the game with the same starting loadout, only changing which special abilities I installed (each of these have a limited number of uses per battle, and can be used instead of moving or firing on a turn, and will have effects ranging from instant shield restore to short-range laser fire).

All of this conspires to make the combat portions of the game astonishingly dull (though necessary in the early stages of a game), but on the plus side they’re only one aspect of the game. To their credit, Arcen have done something very sensible and portioned out the gameplay mechanics steadily, so that you unlock things like technologies and ship customisation later on. This ensures that you don’t get overwhelmed (even so, there’s simply so much to the game that a great many aspects of it went over my head by the end), as do the exceptionally helpful tooltips, which tell you in great detail what you need to do if you don’t meet the requirements for performing some action or other. That said, I didn’t have much of an idea of what the point of the game was until I was about half-way through and instructed on how to form the federation (the point of the game by the way, is to get two races to form a federation, and then get all the other races to join it, or eliminate them).

I mentioned earlier that there’s a lot going on in this game, but it bears repeating. There are dozens of technologies to acquire, some of which require other technologies to be acquired first, and still others only becoming available after a certain amount of in-game time has elapsed. A great many of these don’t provide any direct benefit to you (instead they can be used as bargaining chits with other races), and most will probably be acquired by stealing it from one race or another. Each planet also has “RCI” (residential, commercial, industrial) stats that vary over time, and the state of each will determine which actions you can undertake at that planet. Many of the actions at the planet will allow you to manipulate those stats in some way, but I think that was the point I decided it was outside of the purview of the complexity I was willing to endure in the game, so I paid them little attention (without regret, I might add).

The eight different alien species are all thoroughly distinct; Arcen have managed here to do what so many space-themed 4Xs fail to do correctly. There’s the hive-mind race, the utopian society, the robot corporate conglomerate, and the downright weird: space-owls and alien boars. Crucially they way that each interacts with the game world is different. Each has its own system of government, and so you have to approach each one in a different way to get them to do what you want. One race uses a proxy voting system, rendering your credit useless with them; another makes decisions based upon the in-game calendar.

But for all of this, the overarching problem I had with the game (on “normal” difficulty, mind) was that my input was more or less irrelevant. I spent the first half of the game making a bitter enemy out of a single race, only to find out that said race was allied with almost every other race. The second half of my game therefore was spent getting another race to form the federation with the race that hated me (which is perfectly viable), and then trying to raise my influence with them. This was astonishingly easy, as all I had to do was just give them all of my technologies and then spam “assist with armada construction” for a hundred or so in-game months until we were best buddies. By that point, some of the other races had been eliminated, and all I had to do was pick the right options to steamroll the other races to joining the federation. It’s possible for non-federation races to form anti-federation alliances, but that’s not something I saw happen in my game.

As a simulation, it’s unlike anything I’ve ever seen. As a 4X strategy, it’s nuanced, detailed and extremely deep. But for me at least, the actual game that you get to play is simply lacking in a number of ways. There’s no doubt that Arcen have made an astonishingly interesting game, but they chose to let the computer play it whilst the player watches.

This is probably the first game I’ve played by Arcen where the artwork isn’t run-home-screaming-bad. There’s certainly evidence of some terrible art; such as the design of the ships, but they’re so inconsequential to the actual game that I barely noticed them. There’s some actually quite delightful hand-drawn flavour art for each of the races (and similarly most of the background art  is superb), and watching the galaxy evolve via the fast-forward button on the main map is similarly a treat to look at. My only real complaint is that the battle screens can get rather cluttered, and in particular it can be difficult to spot some of the smaller ships.

The audio is fine, certainly better than Bionic Dues, but then again this is the sort of game to play with the sound off anyway. I noticed a couple of bugs during my playthrough (which have since been fixed), but given the frequency with which Arcen update their games, I suspect there’ll be nothing to worry about by the time the game is released. I was also pleased to note that the game is very Mac-friendly; it runs as a “proper” full-screen application, and you can toggle to windowed mode via the menu bar.

Last updated April 22, 2014 Details of everything we received from publishers as part of this review are available on out integrity page
Gameplay Video
Gog.com Steam