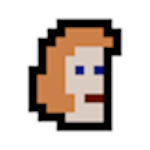 You know those puzzles in adventure games that don't make any sense until after you've found the answer? All of those are in McPixel.

McPixel was originally created for the 48 hour game jam Ludum Dare, then fleshed out and released on a variety of platforms including iOS. After pursuing an unusual distribution route via the notorious Pirate Bay, it took advantage of Steam’s Greenlight initiative where it garnered enough attention to merit a full release on Steam (making it the first Steam Greenlight success story).

The story, such as it is, sees McPixel try to save the day by preventing catastrophes throughout a variety of settings, from a zombie-infested graveyard, to a malfunctioning spaceship. As the player, you direct McPixel to interact with the environment by clicking on stuff, just as in every other point-and-click adventure.

There are a couple of twists however. First, you only get twenty seconds to complete the scenario. Secondly, there’s very little room for error. Perform the wrong action, and the game will cut to an explosion, and you’re thrust into the next scenario. Each round will have several such scenarios, and you’ll be cycling through them until they are each completed successfully. This means that you can rely on trial and error to some extent, but also that you’ll have to remember the actions you’ve previously tried on a given scenario in to avoid making the same mistakes.

The “puzzles” such as they are can be solved to some extent by application of logic, but usually if you’ve previously tried enough actions to get a sense of what’s going on. For example, in one level, there’s a bomb in a trash can, which you’ll only know about if you’ve previously tried opening said trash can (an ultimately gotten blown up for your troubles). Being armed with this knowledge however, might lead you to the conclusion that you need to lure the nearby hobo into the trash can in order to save the day. On the off chance that you do manage to solve three of these in a row, you’ll be awarded a bonus level, which will usually make even less sense than the regular ones.

The humour can be puerile, to say the least, and whether you appreciate it will probably be what keeps you clicking (or not). There are some bonuses, like the vaguely titled “free DLC” and a level creator, but you’ll probably have gotten your money’s-worth after the 100 or so levels either way.

Certainly McPixel is not for everyone, but for those who appreciate it, it will be one of their favourite things ever.

Naturally the game uses pixel art, and there aren’t many graphical options, although thankfully you can change the filtering to something that actually looks good on a large screen. The music is reminiscent of 1980s arcade games and there isn’t much in the way of audio, but then this is a game you’ll probably play muted anyway.

Last updated June 19, 2013
adventure comedy point and click puzzle steam
Details of everything we received from publishers as part of this review are available on out integrity page
Gameplay Video
Steam