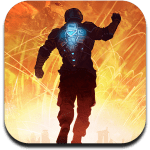 Take the ubiquitous tower defence genre, turn it on its head, add some great production values, and you've got Anomaly: Warzone Earth.

Originally released on Windows and Mac in 2011, it’s gradually crept onto other platforms, including Xbox Live Arcade, iOS and Android, and was well received on each platform.

The story sees the Earth (specifically Baghdad) getting invaded by extraterrestrials, who quickly devastate the landscape. Your job is to command a convoy of vehicles to navigate through the ruined city, now populated by hostile structures (of if you prefer, towers) and complete various objectives.

The way that you do this is to zoom out into a map of the level, where you can set the vehicles’ route, which they’ll then attempt to follow as if on a conveyor belt, shooting at anything hostile along the way, never changing speed. Along the way, you earn cash to buy additional vehicles to join the procession, or upgrade and re-order those already there.

Of course, the towers won’t sit idly by whilst this is going on. They’ll inflict significant damage to your vehicles, and once they’re all gone, it’s game over. However, you have one last trick up your sleeve. You are represented in the level as a commander in power armour, who can collect and deploy temporary power-ups, such as repairing or cloaking your vehicles. Your commander has free roam of the level, but somewhat annoyingly, you can only see what’s going on within a certain radius, meaning that if you stray too far from the convoy, you’ll miss what’s happening to them.

Progressing through the level unlocks new vehicle types and power-ups and awards a score at the end. There are leaderboards but no multiplayer options (as an aside, this was one of the first games to support OS 10.8’s Game Center at launch). You can replay any level in order to improve your score, and you’ll also unlock two “endless” modes which in some ways are more enjoyable than the campaign levels.

One of the issues Anomaly has is that it seems confused by the type of game it wants to be. Clearly it’s strategic, you know the towers and possible routes ahead of time, and it’s all about the planning. Except it isn’t; the levels are won or lost by your ability to judge where and when to use the different power ups, and to frantically swap positions of vehicles on the fly. The lack of a pause function to issue these orders makes it more akin to Starcraft, but there simply isn’t enough depth to entice fans of that genre.

The other downside is that it doesn’t do enough with the formula. The level designs are interesting, and there are a few twists, such as time-limited sections, but 12 unit types across the entire campaign (6 player units and 6 towers) just doesn’t feel like enough. Given the number of tropes found throughout the tower defence genre, you’d think it could have recycled some of the more interesting ones here (such as being able to summon a one-off powerful unit) but that wasn’t the case. These are minor gripes though and the game doesn’t exactly feel anaemic in any way.

Ultimately, Anomaly: Warzone Earth feels a little like a one-trick pony, but it performs that trick extremely well.

Initially the Mac version was plagued by technical issues, but thankfully those have been resolved. The developer has been very proactive in getting them fixed, and the recent 1.22 patch should fix most issues.

The game has an extremely polished feel to it. Everything from the way menus slide in and out is very slick and playing the game feels extremely natural. The colour palette is surprisingly bright and bold given the desert setting at the start, and this continues throughout the game. The voice acting is pretty good, at least in the sense that I found myself wanting to turn off the audio.