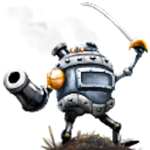 From the creators of renowned puzzler Spacechem comes a real-time card-based tactics game, set in an alternate civil war with steam-powered…

Picture the scene: it’s the American Civil War, with both sides producing an inexhaustible supply of units to destroy each other. The battles are a little different from how history books depict them though, as each side deploys a number of so-called “Ironclads”, huge steam-powered mechanised war-machines, equipped with everything from rifles to bugles and… cats.

Your task is to field these units (along with infantry), who then march steadily down a set of Plants-vs-Zombies style lanes towards an opponent who does the same. Units that make it through to the other side score a number of victory points; score enough of these and you’ll win the game. It’s in how the units differ that you’ll find the strategy; some units move faster than others, some have longer ranges, and Ironclads can equip assorted items to increase their abilities and can crush infantry by walking over them. It’s a game about planning, and then abandoning the plan based on what your opponent does.

You do all of this with cards. There are cards that allow you to field different units, cards that let you reposition them, and cards that provide permanent or short-term benefits to fielded units. Each card has an associated “Action Point” (AP) cost, and you generate 1 AP every turn.

So it’s like many other collectible card games (CCG) we’ve seen before (with probably Scrolls providing the most obvious comparison thanks to its lane mechanic), except Ironclad has been given a rhythmic pulse: turns happen, whether you are ready or not, and as such you lose the luxury of careful consideration. This takes some getting used to, and can feel a bit frantic when first starting out, the offshoot of this is that there’s no down time in waiting for an opponent, and as you get more experienced with the gameplay you’ll want to deliberately refrain from taking action anyway, in order to generate more action points.

Though the core gameplay is solid, I fear it might be overwhelming for new players. There’s a tutorial of sorts, whereby you’re gradually introduced to the basics, from fielding units, to maneuvering them around obstacles, to combat and deck-building, but it’s a little clumsy, and when the first proper level began I felt woefully unprepared and unsure of what I was trying to achieve. It did all click for me after a couple of losses, but then I’m something of a CCG veteran, so there were less blanks for me to fill in than there will be for others.

Coupled with this is the deck-building aspect. It’s very streamlined, but the game only gives you one pre-built deck configuration (which becomes next to useless very quickly), and given that deck-building is one of the most advanced aspects of a CCG, I’d have liked there to be more sample deck configurations generated automatically. I also felt that the deck builder lacked the sort of feedback more experienced players would expect, such as the cost distribution for the current deck, but then maybe I’ve been spoiled by the delightful deck-builder found in Magic 2014‘s sealed play mode.

That said, there’s arguably less options available to build a deck than traditional CCGs, as all decks must have exactly 20 cards (and there’s no resources to worry about), and be comprised of no more than 2 factions, which are just card groups for all intents and purposes, assuming you aren’t paying attention to the (beautifully comic-book-rendered) storyline. Each faction has a strong sense of individuality, though perhaps not quite as strong as other CCGs; I couldn’t really point to a specific faction and identify its suited playstyle beyond this one having armoured units or that one having units that have chained abilities. Though many of the cards complement each other, there weren’t any combinations that stood out to me as being synergistic as with other CCGs.

Cards are unlocked through playing the game and completing various challenges, and this is something I’m on the fence about. On one hand it lends a great sense of progression to the game and makes you want to try and ace every aspect of the game. On the other hand, you don’t know ahead of time the cards you’ll unlock from completing a particular challenge, so it can be a little annoying to have to complete some of the challenges just to try and fill a hole in your deck (not to mention that some of the challenges can be rather tough, and yet others require you to play multiplayer). What does work well is that you earn new cards via using many of the basic cards. A particular infantry card for example, might require you to destroy 30 enemies with it (across all playthroughs), at which point you’ll unlock a set of advanced infantry unit cards. In this way, the game rewards you just for playing it, and each of the requirements are lenient enough to make this a regular occurrence.

I personally tend to favour aggressive strategies in these types of games, but in the single-player mode it seems you need to adopt a more reactive approach. I found that many games quickly reached an ongoing stalemate, where I was merely acting to counter what my opponent was doing, and thus would lose when I made a mistake like placing a unit in the wrong lane, or stopping it in the wrong place; whereas winning would feel like it was down to luck of card draw more than clever tactics (you can’t “exhaust” your deck, spent cards are shuffled back into it). Some levels add other ways to score victory points, such as through capturing (and then holding) mortars on the map with infantry; and there are ways to increase AP generation per turn, such as by capturing mines on the map with Ironclads equipped with drills.

The main problem with the single-player portion is that later levels can be frustrating because your opponent is always given an advantage by the way the map is designed, such as having closer capture points. Pretty much every level involves the AI playing with a new card or two, so you have to try and build a deck to counter it, but also to overcome the terrain disadvantage. It all adds up to feeling like the deck is permanently stacked against you, which is absolutely makes for a challenge, but it just ends up feeling wrong for this sort of game.

Then there’s the two significant design flaws with the game as a whole. One’s quite serious, but fixable, the other less so, but both are somewhat endemic to the timer-based system. The most grievous problem is that you pause and unpause a unit’s movement by clicking on it. You attach parts (or use buffs) by clicking a card and then clicking the unit. Maybe you can see where this is going: all too often, using a card on a unit causes it to stop moving (or start moving), and it might be a couple of turns before you notice this (there’s a visual indicator, but it’s not nearly distinctive enough to be useful).

So the second issue then is that because everything is timer-based, there’s a limit to how much you can do in a single turn before the game plummets forward. Mostly this is not an issue; you’re limited by action points, and most cards are expensive, but I did encounter a number of scenarios where I’d stored up a large pool of AP and was ready to lay down a unit or two and power them up with a couple of other cards. If you’re quick you can throw down three cards in a turn, but this isn’t always enough, and you can’t always be quick. The balance of power is so fine that games are won or lost in a single turn, even if it takes several turns for the effects to fully play out. Again, this may not be an issue for some, and at least in multiplayer, both players have the same disadvantage, but it was enough to ruin some games for me.

In a year that’s seen an explosion of CCGs, Ironclad Tactics stands out from the pack with its timer-based gameplay. Some people will hate it for that; a key component of most card games is being able contemplate and plan, but there’s no question that this built-in tempo works well in multiplayer.

I did encounter a number of issues related to the Mac version of the game; the most serious of these was that you can command-tab out of the game but not back into it; but I’ve been assured by the developer that this is being looked into.

In all other respects, the game feels very polished, even in comparison to Spacechem. The art style is crisp and clean, and the interface is intuitive for the most part.

Last updated September 28, 2013 Details of everything we received from publishers as part of this review are available on out integrity page
Gameplay Video
Mac Game Store Steam