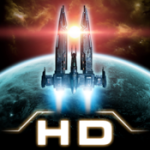 Galaxy on Fire 2 was a smash hit on iOS, and there have been numerous versions and addon packs. In August 2011 it made the transition to Mac OS, and with the release of the Valkyrie add-on, it is up-to-date with all the other versions. This game also has the rare honour of being available only on Mac OS and not (yet) on Windows, whilst still being an exceptionally good game.

The game is a space simulator, in the vein of Freelancer. It’s basically about making cash to buy bigger ships and better weapons. To do so, you can take on combat missions, mine asteroids, trade goods, and progress through the storyline. Freelancer veterans will appreciate the “we don’t run this place” references (this is a game that doesn’t take itself to seriously), as well as the overall look and feel. In fact, the game is very similar to Freelancer in a lot of ways, albeit with more modern graphics and (at times, weak) sense of humour. It’s slightly lighter in other ways too, for example there’s no energy management of weapons to deal with (in other words, you can just fire your weapons constantly, although secondary weapons, such as mines and missiles are limited); nor can you assign weapon groups (for example, if you want to use only EMP-type weapons, you have to unmount all other types whilst docked).

The game features iCloud integration, meaning that you can sync your gameplay between Macs (it’s worth noting that save games are also compatible with the iOS version). The Valkyrie add-on is worth considering as it boasts a number of extra features, such as automated turrets, as well as more of everything that makes the original so enjoyable.

One of the downsides (it’s a minor one) is that the difficulty setting cannot be changed mid-game. Having played the iOS version (on “normal” difficulty), I found the combat to be a bit of chore, as it was more of a battle with the UI than the other spacefarers. Here that’s not really an issue, and as a result, the combat comes off as a bit less challenging at the same level of difficulty- something to bear in mind if you do plan on syncing the game with iOS.

There are some annoyances, for example, there are no tooltips to explain what the various buttons do (though most are self-explanatory), and you can’t access the galaxy map when not docked, which is much more of an oversight.

The controls deserve a special mention here. The game was originally conceived for iOS, so I was expecting the worst on the Mac. However, I was delighted to find that not only are keyboard, mouse and xbox 360 controller schemes implemented, but they work wonderfully (in fact, you can even play it with a Wacom tablet if you want). The keyboard controls are fully mappable. On the controller, the face buttons activate weapons, the right stick is used for throttle and side thrusters, and the left stick changes your orientation. But best of all is the mouse. Click the right mouse button to enter mouse flight where you move the mouse in the direction you want to go, and the left button will fire your weapons (although if you’re on a MacBook you might want to consider using something instead of the trackpad).

The only (minor) downside is that you will need to use the mouse to navigate the menus; there’s no way to play the entirety of the game using just a controller.

It runs like a dream. Even in heavy firefights, there was no appreciable frame drop, and it looks gorgeous. Developer FISHLAB clearly know this, as there’s a great “action freeze” mode, where you can pan the camera around to take in the action (or take screenshots). The iOS version looked great, and here the transition to 1080P HD only makes it look better. That said, be sure to check out the minimum requirements, as we tested it on a top-of-the-line Mac Pro.

The soundtrack is pretty good although after 20 hours of play it becomes a bit too much. The only negative is the voice acting, which is extremely bad (although the translation from the original German is extremely good).

As of 10.8.2, the game doesn’t run full-screen correctly on MacBook Pro with Retina. We’ll update this if there are any further developments.

The following DLC is available:

Other DLC is available to unlock in-game items early.

I’m still unable to find the mac version of this game on iTunes or anywhere else. Kindly send the URL where i can find it.