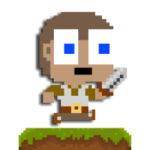 Downloadable content (aka "DLC" or "In-App Purchasing") has gone too far. Or at least, that's the opinion of the developers of DLC Quest.

At first glance, DLC Quest is a platform game. Except, well, at the start of the game your character can only move right. To allow him to move left (and jump), you have to “purchase” the Movement Pack DLC. In order to hear any audio, you must purchase the Audio Pack DLC, and to pause the game, well, you get the idea. The way that you purchase these DLC packs is (fortunately) through in-game currency you collect throughout the levels (as you would in say Mario).

This tongue-in-cheek approach extends to how you solve puzzles throughout the levels. For example, early on you’ll have to “grind” by using a grindstone 10,000 times. Don’t have time for that? Fortunately the shopkeeper will sell you DLC to speed up the process. And so on it goes, effectively making this as much a puzzle game as a platformer.

There’s no question that this is aimed at serious gamers. There are loads of comedic references to other games, and the cheerful pixel art style and chirpy 8-bit audio imbue it with a sense of nostalgia- this is a celebration of classic gaming rather than a bitter poke in the eye at more modern gaming. If the puzzle-solving element doesn’t hook you, the constant drive to unlock everything will. It’s a rather short, but nonetheless very entertaining game.

The resolution is limited to 1270×720 which is a shame (although it’s not like the art style would really benefit from a higher resolution) and the only input available is the keyboard (the keys are remappable, and it arguably doesn’t need an alternative input method).