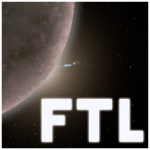 Your shields have been penetrated, your engine room is on fire and the pirates have just teleported onto your ship. You’re down to two crew members and your oxygen levels are depleting. What do you do? Soldier on bravely, or accept your inevitable defeat and then start a new game to do it all again?

FTL: Faster Than Light, released on September 14th, is the first of the recent Kickstarter success stories to be released. Developed by Subset Games, the project reached 2005% of its original target of $10,000. Subset Games is a two-man team consisting of Justin Ma (artist/designer) and Matthew Davis (programmer/designer) who, after the incredible success of their kickstarter project enlisted the help of Tom Jubert, best known for his work on the Penumbra series and Driver: San Francisco.

You are the captain of a Galactic Federation ship, tasked with a mission that is vital to the survival of the Federation. Your goal is to outrun the near-victorious rebels in order to deliver the information you have to the Federation. Along the way you will face off against ruthless space-pirates, rebel scouts and slavers, The story evolves as you play, with over 25,000 lines of in-game dialogue, most of which you cannot unlock without specific equipment or achievements.

The most important part of the game is the choices you make, a lot of the story choices are based on a risk vs reward system. You can take the easy route, thus avoiding the risk of losing your ship– but then end up without many upgrades; or you can opt for the high-risk reward path, taking a bunch of damage but be able to afford to fix it and upgrade your ship, if you survive.

FTL is a spaceship simulation roguelike. Unlike other games set in space, Subset didn’t want to go down the overused ‘dogfights in space’ idea, rather they wanted to create an atmosphere that is firmly held in science-fiction history, the control of a ship. The feeling of a captain shouting out orders to his crew, demanding that energy be removed from the engines and rerouted to the weapons systems. This is the gameplay that Subset wanted and this is what they managed to achieve.

You captain your ship from a top-down view, you can see all of the rooms in your ship and you can move your crew about accordingly. You can choose to shut down one vital system in order to fully power another. Sending crew to fix broken systems or to battle boarding pirates and enemies before they destroy your ship from the inside out, all the while defending yourself on a larger level by attacking and destroying the vital systems of the enemy ships. Targeting their weapons first in order to render them useless and giving your crew time to repair any damage in time for the next attack.

Using your FTL (Faster Than Light) drive, you jump from point to point around a sector, never knowing quite what to expect, unless you have acquired a navigation augmentation for your ship. The goal here is to progress to the exit jump point, the point on the map that enables you to warp through to the next galactic sector, constantly trying to stay one step ahead of the rebels that are trawling the galaxy searching for you their position in the galaxy is shown by a large red that progresses across the map as you travel. You need to be fast and you need to be smart, you won’t reach every beacon point in a galaxy, at least not without having to fight off the rebel fleet as their search area increases.

The in-game currency is ‘scrap’, which can be salvaged when you destroy an enemy ship, by selling items or as through other means. You can purchase a whole multitude of ship upgrades during regular gameplay as long as your ship is not under attack. You will also come across stores at beacon points, these stores can repair your ship, sell you fuel, missiles or drone parts as well occasionally selling crew members, weapons, drones or ship augmentations.

However, a lot of damage can simply be avoided by upgrading your shields at regular intervals, each shield point (up to four) indicates the amount of damage your shields are able to absorb before the weapons penetrate and damage your hull. You can also upgrade your FTL drive in order to increase your dodge chances, as well as upgrading your weapon system to power more weapons plus a whole lot more.

Damaging your opponent works in the same way, you will have to firstly damage their shields before you can make any direct attacks. Combat is played out in real time, your weapons recharge whilst you order your crew about the ship to fix any damaged parts, hitting the spacebar in combat pauses the game, allowing you to aim your weapons at specific enemy systems or move your crew around, upon hitting space again you unpause the game and any order made during the pause will be acted out when possible.

You can target the system rooms on the enemy ship, for example disabling their shields. In this way you can make the battle much easier. Want to cause some more trouble? Target their oxygen or medical bays. The enemy crew will slowly die as the oxygen is depleted and they fight to fix the O2 supply. The lack of a medical bay means that they cannot heal, which, if your weapons break the shields again could cause the death of a crew member.

The combat can become very repetitive, once you find a strategy that works to your advantage there is rarely any reason to change your tactics. This usually involves targeting the shields and weapons and then blasting away until their hull is breached and their ship destroyed. Occasionally you may come across an enemy that this strategy doesn’t work against. In these cases you need to adapt your attacks on the fly. Try attacking different systems to see what works and what doesn’t. In some cases killing off the crew slowly is a better option than trying to destroy the ship.

FTL operates on a permadeath system. If your crew members die, they’re dead for good and you need to find somewhere to re-hire new crew. If your ship gets completely destroyed then you need to start up a new game because that ship is gone forever. As well as that, you never know what to expect, each game is played on a randomly generated galaxy, everything changes on each new playthrough, you might get lucky and find a new weapon in the first sector on one playthrough but don’t rely on finding it there on your next.

Each story segment or battle that you encounter will also be different. Sometimes failure is unavoidable, you will jump to the next beacon only to be faced with a far more advanced enemy ship in which case you find that by fighting you are simply either waiting to die or hoping that your FTL drive is ready to jump before then.

During your journey across the galaxy you will come across a variety of alien species, each species (apart from humans) have special abilities or bonuses. The Mantis get a boost in combat but are terrible at repairing systems whereas the Engi get a bonus in repairing but will die quickly in combat. In order to succeed at FTL you need to maintain a diverse crew. Your crew can be sent to control stations and some of the alien species can provide major bonuses in these station, for example if you send a Zoltan to man your weapons he will be able to provide an extra energy slot in the weapon system, allowing you to power more weapons or just more powerful weapons.

The game was built around the idea that you could drop in and play for short 30-90 minute sessions whilst still retaining an incredible amount of replay value. There are nine playable ships, eight of which are only available by unlocking them via story options or completing achievements, there are also two individual layouts for each ship’s interior. Everything inside the game is randomly generated, you play the same basic story each time but the smaller elements are made by your choices in game.

The beginning of the game can be a little dull, your ship can handle almost every enemy in the first sector without any trouble, it’s only around sectors three or four that they start causing problems. A lot of people argue that modern games are too easy, that they hold your hand whilst playing and you can never truly fail. FTL completely reverses that situation. If you’re looking for a game that will challenge you, this is it. There is no hand-holding, there is no respawn system, once you die, you’re dead. Game over. If you want a slower-paced game, you can activate easy mode and still be faced with the challenges that normal mode brings but with less powerful enemy ships, and sometimes this mode can be useful if you’re looking for more than thirty minutes of gameplay before you die.

Whilst the game is designed for the short gameplay experience, there’s absolutely no reason to stop you from playing for hours. Constantly trying to get further than your last attempt or trying to unlock a certain ship or weapon. It can be addictive. I have caught myself, on multiple occasions, thinking up game plans and battle tactics to improve my game a little.
Some people will take away the short experience the game naturally offers and other people will be able to immerse themselves fully into the gameplay and enjoy playing ten or more games in a row.

FTL: Faster Than Light offers a tough, unforgiving gaming experience for gamers that enjoy long or short periods of gaming. It won’t be long before you’re firing up your FTL drive multiple times a day to try and outwit those rebel scum.

FTL is not a resource heavy game at all. It natively runs at 1280×720 and has options for fullscreen mode. There were no visual errors or bugs during my time with the game and it runs very smoothly. The audio quality was good with the music (created by Ben Prunty) closely fitting the theme of the game.

Last updated June 19, 2013
gog.com roguelike sci-fi simulation steam strategy
Details of everything we received from publishers as part of this review are available on out integrity page
Gameplay Video
Gog.com Steam