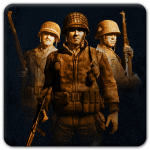 Stripped down to its undergarments, Company of Heroes Complete: Campaign Edition is both triumphantly steadfast and yet tragically humiliated.

Let’s not dwell on that for now though. With this version of the game, we’ve got a series of missions to play through, whereby you take control of some infantry and vehicles, and lead them through historic moments from World War II. Your small army (and it is very small, this game is all about taking care of your soldiers rather than mindlessly using them as cannon fodder) will traverse difficult terrain, capture strategic supply points, and use cover in order to survive against constantly overwhelming odds.

Rather than controlling any number of similar units, you’ll control and deploy squads. So you’ll have a squad of six riflemen who carry semi-automatic weapons. Order them to grab an abandoned mortar, and they’ll become a mortar squad. Use them effectively, and they’ll get promoted, becoming even more powerful. Stick them in the enemy’s line of fire though, and their numbers will quickly be cut down, making them ineffective until they can be reinforced.

The campaigns can be punishing, and you’ll rarely succeed through sheer luck. Fail to take advantage of the environment properly, or to use your company’s various talents and abilities efficiently, and you’ll end up having to replay the level until you get it right (or lower the difficulty). By the time you’ve finished the first campaign, you’ll know the strengths and weaknesses of every American unit, leaving you with a further 5 campaigns to play through.

The campaigns themselves offer a great deal of variety in both storytelling and map design. The “Operation Market Garden” and “Liberation of Caen” campaigns offer a twist on the established convention by letting you play as the German and British armies respectively. The German campaign is particularly tastefully done, with storyline telling the tale of two brothers caught up in both a war and emotional turmoil.

It’s a pity that the multiplayer modes were removed from the game, but for whatever technical reasons prompted such a removal, it seems like a huge oversight that the skirmish modes weren’t left in. Once you’ve completed the 6 campaigns, there’s little incentive to replay anything (other than to increase the difficulty), whereby with the Windows version some of the best fun to be had with the series was the “Stonewall” mode, which saw you taking a small team and defending a position against increasingly desperate odds.

All in all, a truly unique experience and perhaps a pity that this edition is doomed to be defined more by what’s missing than what’s included. A lack of a skirmish mode, and no mod support really prevent this from being a must-buy. The price point is also a major hindrance, as whilst it’s slightly cheaper than Steam’s complete pack (for the Windows edition), Steam’s had it on sale many times that it’s almost not worth getting the Mac version and just sticking with the more fully featured Windows version via Boot Camp.

Left as a hollow shell of its former self, it still sparkles with memorable moments and solid gameplay, but forget about sharing any of them with your friends.

Update: You can read Aspyr’s comments on why skirmish mode was not included.

Update: As of version 2.602.3, the Mac App Store edition of the game now includes skirmish modes.

With everything maxed out the game still runs smoothly, aside from the cut scenes which falter a little (but to be honest they look pretty bad by modern standards in any case). The games also crashes on exit every single time in OS 10.8, although this is more of an annoyance than a real problem.

Everything about the game is like a love letter to HBO’s Band of Brothers, from the music to the colour palette and the banter between characters. It’s all extremely polished, and gives the game a truly cinematic feeling.

The single-player campaigns for the two expansion packs are both included in this version:

Although there are several mods available for Company of Heroes, none of them will work with this version of the game.