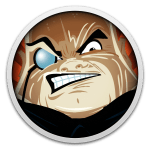 With solid gameplay, lots of toys, and dated visuals, Evil Genius is a fun game to dip into from time to time, if not something to occupy your every waking moment.

I think we can all agree on something: being a supervillain looks like a lot of fun. You get to live in a secret underground lair, putting an army of minions to work in researching lots of shiny toys with which to cause mayhem, as well as devising news ways to torture goody-two-shoes government agents that are trying to usurp you (they’re just jealous).

Evil Genius brings this fantasy to your Mac, packaged in the gameplay of one of the best games ever made: Dungeon Keeper. First released in 2004, it was applauded for its humour and novel twists on the formula. Now, nearly nine years later, it’s available on the Mac OS for the first time.

As one of three eponymous evil geniuses, you get to design and build a base under a mountain on a faraway island. The game begins the same way each time: you start with a set of resources with which to recruit minions, build and furnish rooms, and gradually expand your empire of villainy.

Arguably the best part of the game is the base building itself. You drag out blueprints of rooms, arrange various furnishings, and your minions go to work with dynamite and crates, turning those blueprints into rooms. It borrows heavily from Dungeon Keeper and Theme Hospital, and it works; building new rooms never gets old. What also works is the generous pace that the game gives you new rooms an items to play with. Complete any minor objective, and you’ll typically see new rooms become available, and new items to place in existing rooms are unlocked. Everything seems like so much fun. Early on you’ll be able to build rooms such as a freezer (with which to stash dead bodies, of course!), and later a laboratory and even a casino.

There’s also an abundance of traps to build and scatter throughout your base, and whilst it’s fun to watch infiltrators get snared in a trap (or bounced between several traps if you plan carefully enough), the game doesn’t really reward you well enough for doing so. Indeed, the actual “gamey” parts of the game are surprisingly lacklustre, but more on that in a moment. There’s also the ability to create a sophisticated series of security networks, with alarms, cameras, and loudspeakers, though I suspect the real purpose of this is just to make the game more awesome when you go to “red alert”.

You start off with a few minions, who will do everything from hauling and building, to killing, kidnapping and torturing hapless tourists and secret agents that roam the island’s surface. You also start with a single henchman, who will rarely get their hands dirty, except to put the kibosh on someone, or undertake a mission. You can directly control your evil genius avatar, as well as any of your henchmen, but not the minions (though actually this shouldn’t be taken as a bugbear). Interrogating characters in the game will lead to new types of minions being unlocked, with the option to have those minions train others. It’s a neat system, making more sense than simply unlocking new classes, without feeling like an extra layer of busywork to undertake.

To generate income, you send your minions and henchmen out into the world for them to steal. This sounds more interesting than it actually is; in reality you just rack up a number of minions in different regions on a map, which simultaneously raises your “heat” meter,  attracting more prying eyes to your base.

In addition to stealing, you can opt to have your overseas villains “plot” (provided your base meets certain requirements), uncovering potential missions (“Acts of Infamy”) and raising your notoriety level, whilst ultimately leading you to the victory condition of the game. This part of the game is highly uninspired though, as it’s merely about balancing figures, with very little substance to hold your attention. You will be rewarded for successfully completing acts of infamy though, typically in the form of new items or trainers being unlocked.

Meanwhile, back at the base, you need to watch out for troublesome agents or suspicious tourists. Herein lies the biggest problem of the game: with the exception of carefully placed traps, you need to manually police the island. This means scrolling across the map on a hunt for agents, burglars, and other risks, and then “tagging” them (performing a series of clicks on them) for capture or execution. Captives can then be further tagged for interrogation and other actions. Mid-way through the game this feels like a lot of clicking to accomplish basic tasks, and although there are mechanisms to reduce this (such as traps and security systems), more often than not it feels like a lot of work to just avoid a lot of work. On a similar note, the game lacks a speed control, which means you spend a lot of time just waiting for things to happen.

If it also seems like there’s a lot to learn in the game, that’s because there is. Fortunately with the game having been released a while ago (and having remained rather popular since), there are wikis and other resources scattered around the Internet. That’s not to say that the in-game resources are no good; there is a full tutorial, an in-game encyclopaedia of various game mechanics and features (complete with videos), and the game itself is paced well enough that you should never feel overwhelmed.

The humour is woven into every facet of the game. The menu screen is reminiscent of the title sequences from every Bond film, and the animations are varied and often hilarious. Special mention must be made of some of the interrogation sequences, which can involve a variety of different objects and funny moments. It made me appreciate how rare it is to find comedy in games recently (with some notable exceptions), presumably because comedy is so subjective and therefore financially risky.

Many times whilst playing Evil Genius, I wondered whether the game shares more with The Sims than Dungeon Keeper, and though overall that’s not the case (this is a game at the end of the day, even if the challenges are not as interesting as perhaps they ought to be), there’s something rather marvellous at living vicariously through your tiny, evil genius.

The game runs through Wineskin, so you shouldn’t expect a smooth ride. Setting up the display in particular is extremely problematic. In some cases we were able to select a maximum resolution of 1280×720, but other times we were restricted to a 4:3 aspect ratio. The  most problematic issue though is that the game would simply not start on occasion, necessitating a reboot of the Mac in order to launch it.

In terms of the visuals, the art style is let down by the ageing 3D technology it’s built on, which is limited to blocky models, limited texture, and flat lighting. On the flipside, the animation quality is generally superb, and are the basis for a lot of the game’s humour.

Last updated June 19, 2013
comedy real-time sci-fi simulation strategy
Details of everything we received from publishers as part of this review are available on out integrity page
Gameplay Video
Gog.com