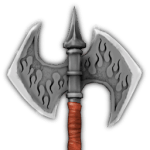 Packed full of ideas, a great cast and a head-banging soundtrack, Brütal Legend seems simply too awesome to go wrong. But like a one-man-band at a Heavy Metal concert, the end result is a confusing mess of different noises, none of which are what you paid for.

Original released for consoles in 2009, Brutal Legend (which is how I’ll spell it from now on, for fear of angering the mighty Google) generated a great deal of excitement. Not only was it a rare game to celebrate all things Metal, but it was penned by some of the team behind comedy greats “Monkey Island”, and featured voice work by Jack Black and Tim Curry. Nearly four years later, the game was released for Windows, with the Mac version shortly after.

The game stars Eddie Riggs (Black), a roadie for a Metal band who finds himself teleported to a world where electric guitars cause minor explosions, and every other person seems to be a member of a satanic cult, hell-bent on sending him to the afterlife.

The game starts out as a third-person action hack-n-slash game, borrowing elements from classics such as God of War or Darksiders, and in truth it’s a welcome change to see that genre of game find its way to Macs. You quickly gain the ability to form combos out of the basic Axe and Electric Guitar attacks, teaming up with another character, and then activating special powers via a Guitar Hero style quick time event.

Seemingly not content with all of that, the game ramps up even quicker, giving you a car and a long track to drive through, laying waste to everything in your path (not unlike Carmageddon), and then a boss fight straight from any spectacle fighter. And then it becomes completely open world, like a Grand Theft Auto game.

That’s the first hour of the game.

And to be honest, it’s highly enjoyable. Even now, if the game had just gone on in that manner, I’d be writing a different review. But it doesn’t stop there. In its apparent quest to borrow from every other game ever made, things get a little weird in the gameplay department. First you get given the opportunity to free and subsequently direct some minions, which reminded me of the Overlord series. Here you could almost feel the game start to burst at the seams, as you try to direct them around the playing field, using an interface designed for (an in most respects, suited to) a gamepad (to be clear, there are no affordances that make using a mouse an keyboard any more attractive). It feels like trying to make a sandwich while wearing oven gloves.

But that’s just the start. Shortly after that,  this expands into needing to hold control points on a battlefield. And then you’re building units, flying above the battlefield, in what’s practically a full-blown RTS along the lines of StarCraft, all the while issuing commands using a gamepad and trying not to break down into tears because you just have no idea what’s going on any more and this isn’t the game you thought you wanted to play. Suddenly you’re not so much making a sandwich as trying to separate salt from sand. And still wearing those oven gloves.

I hope at this point, the message I’m not-so-subtly trying to convey is coming across– seemingly every type of game is crammed into this one. Double Fine clearly had so much enthusiasm, it made sense just to keep adding more and more things. “Let’s add a car!” “Let’s make it upgradeable!” “With guns!” “Let’s give the player some minions!” “Let’s give the player an army of minions!” And on, and on. Burgeoning creative writers are frequently taught to “kill your darlings”. That is, to not get too attached to an idea that it survives to the detriment of the piece as a whole. During my increasingly uneasy playthrough of Brutal Legend, that stuck with me. Why did they keep this in?

There’s no denying the love that’s gone into the game. From the opening menu (which manages to be original, eye-catching, and functional all at the same time) through to the voice acting from a range of people who really have no business doing so, everything is utterly superb (even Ozzy Osbourne’s typical struggle to form sentences from vowel sounds comes off as more charming than ingratiating). But everything feels strangely under-developed or abandoned. The next big idea for the game came along, the new shiny thing for the developers to build, the player to play with, leaving everything else behind. The end result is that there’s no part of it that’s a real joy to play, barring perhaps the opening hour where things are more straightforward. Even worse, is that none of it is optional. Sure, some people will love the driving sections, because they love that sort of game. But the people who come for the driving, won’t necessarily stay for the RTS-lite elements. Many will hate it. And by the end of the game (at least for those who persist), I can’t shake the notion that the overall feeling will be a tendency to remember the bits that annoyed or irritated, rather than the bits that were quite good.

The game certainly can’t be accused of being a terrible port. There are a wealth of options to tweak, from field of view to anti-aliasing; but it does however seem to suffer compared to its Windows cousin. There are minor graphical issues aplenty, though nothing more offensive than stray vertices, but the frame rate did have a tendency to tank on occasion on our Mac Pro.

All previously released DLC for the console version of the game is included in the Mac edition.

The game includes a multiplayer mode where you can re-enact the most terrible part of the game, namely the strategy/action hybrid part, in up to 4v4 battles.