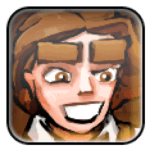 Like a duck in power armour, Dungeons of Dredmor is both silly and very tough. It's one of the most accessible roguelikes available on the Mac, and it's instilled with a great sense of humour.

As with most roguelikes, you generate a character who adventures through a series of randomly-generated “floors”, defeating enemies and avoiding traps in order to gain experience and loot (with which to collect better loot and more experience). And as with most roguelikes, your character will get killed a lot (the so-called permadeath, which means when your character is dead, you have to create a new one, can be disabled here, but this is rather missing the point). It’s also turn-based, meaning it’s about about thought and planning as opposed to reflexes or actions per minute. Unlike other roguelikes, Dungeons of Dredmor is a completely visual experience (other roguelikes traditionally favour symbols and letters over icons and furnishings).

At the start of the game, you pick 7 skills from a variety of combat, magic and crafting-focused selection, and then make your way into the eponymous dungeon. Earning enough experience to level up allows you to unlock a new ability from one of your chosen skills. A great deal of the strategy (and fun) of the game is in deciding which skills will complement each other best. Some are best suited to the earlier floors, whilst others don’t become useful until closer to the end (or you could just opt to give your character a random selection and see what happens). Once inside the dungeon, you’ll find a vast array of armour and weaponry (both melee and ranged) as well as potions, crafting components, and er… funghi.

There are pop culture references throughout, and these really help to ease new players into the game. There’s a tutorial, which will teach you the basics, but after a few hours of playing, you’ll find yourself hitting a wall where the vague descriptions of the items and stats prevent you from knowing which ones will be most useful. At that point it’s probably best to read up some strategy, and to check out the Dredmor Wiki, which will help to make the various elements of the game less opaque. Above all, don’t expect to complete the game. There are reports of people playing for over 300 hours and still not being near to completing it.

For all its accessibility (compared to other games of the genre), it does suffer somewhat from a weak interface. Once you become proficient at the game and understand the mechanics involved, you’ll find the camera angle slightly irritating, as certain items will be barely visible next to a southern wall. You’ll also find yourself mis-clicking quite a lot, such as when you attempt to open a door but actually end up moving instead (some of these issues can be mitigated by using keyboard controls however). Added to that, the inventory management can be a bit of a pain, as it hasn’t been optimised particularly well to play full-screen. That said, the game has received a lot of welcome post-release support, both with interface improvements and balance tweaks.

This is a game everyone should have on their laptop for those long flights (or dull meetings). Also… those monster zoos!

The game is hardly a drain on system resources, and will run well on any hardware. Don’t expect to make use of the retina display though as it will crash at very high resolutions. The art style is an acquired taste, personally I like it (and in any case it’s infinitely better than ASCII-based roguelikes).

The sound is adequate (it could really have used some ambient sound effects), and the music is surprisingly good.

There are 3 downloadable packs available (including one which is free), and each adds new items, skills monsters and game mechanics (and all are highly recommended if you’re enjoying the base game).

Modding is fully supported. You can install mods to ~/Library/Application Support/Dungeons of Dredmor/Mods or you can use the Steam Workshop.

Last updated June 19, 2013
comedy fantasy roguelike rpg steam steam workshop turn-based
Details of everything we received from publishers as part of this review are available on out integrity page
Gameplay Video
Steam