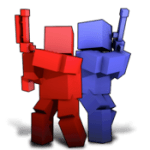 Cubemen is a fairly new addition to the already crowded tower defence genre. Available for PC, Mac and iPad, it adds a few unique twists onto a familiar structure.

The gameplay is standard tower defence stuff. You create increasingly powerful (and costly) towers (the titular cubemen) in an attempt to curtail the enemy’s assault into your base, whilst using cubes (awarded from destroying enemies) to build more. But here’s where it differs from the rest of the bunch, and starts to get interesting: your cubemen move about freely. That’s not to say that it becomes more of a real-time strategy game: your little guys can only move between predetermined points, but they can (and will) engage enemies whilst on the move. Adding to this is that the maps are fully 3D (again with a cubic style), so positioning cubemen becomes doubly important.

There’s no campaign (and no real tutorial) as such, instead you’ll play against the AI through a series of progressively more complex maps (each of which has a global leaderboard, and can be rated by players, which is a nice touch). There’s a couple of minor interface issues, such as having to click on a cubeman type in order to find out what it does (but you can only do so if you can afford to buy it), and cubemen will happily fire into walls if they have no direct line of sight, which means that you have to keep an eye on them at all times. Another problem is that although all of the cubemen types are unlocked from the very start, there seems to be much more of an incentive (particularly in the early game) to keep churning out cheaper units rather than saving for the deadlier ones, in order to maintain dominance at key points in the map.

That said, there’s a great variety of play modes. In addition to the six varieties of the standard “defence” mode, there’s also a skirmish mode, which sees you play against an opponent with exactly the same goals and resources as you (with a race to secure the best positions), and a recently added “mayhem” mode, which allows for up to six simultaneous players (and is a lot of fun).

There’s a scarcity of options (just the resolution), but given the minimalist art style, there’s no real need for any. This game runs very smoothly, in fact you’ll have the same experience playing on a MacBook Air as a desktop (there’s no right-clicking involved, so you can use it on the single-button touchpad without complaint). The audio is a bit lacklustre, but then I imagine this is the sort of thing you play whilst listening to something else anyway.