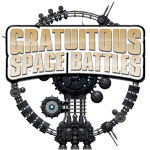 Mac App Store
has been updated, adding some new visual effects and a new (optional) feature to single-player modes that allows you to change orders  for your ships and even give individual weapons specific targets mid-battle. Says developer Cliff “Cliffski” Harris:

Unlike big name ‘triple A’ companies, we at positech games don’t believe in ditching support for old games, or cynically turning off servers to encourage people to buy our new titles (even though we’d love people to buy gratuitous tank battles :D). Instead, we have released yet another patch/update for GSB over 3 years after release. This is a free update, not DLC.
What have we changed? Well we have added the option that dare-not-speak-it’s-name. We have added mid-battle control to gratuitous space battles.
It’s only an ‘optional’ feature, and only works in single-player offline games, but from patch 1.60 (which is now live, steam copies will be updated soon), the player can select ships and issue movement and fire orders mid battle, and even edit the ‘standing’ orders for ships in the middle of an engagement.

You can watch a video demonstrating (and explaining the motivation behind) the changes below.