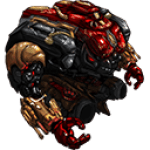 A tactical turn-based roguelike where you take control of a squad of customisable mechs, and must build up your forces for an inevitable confrontation with a robotic enemy.

Those tireless, prolific boffins at Arcen just will not rest, not now, not ever. The latest entry to their games catalogue is Bionic Dues. It’s going to be out next week, and will combine two of my favourite things: mechs and roguelikes:

Bionic Dues is a tactical, turn-based roguelite with mech customization. Guide multiple classes of Exos through a variety of missions filled with enemy robots that are as buggy as they are angry.  This is at least as bad as it sounds.  Explore for loot, destroy key robotic facilities, and brace yourself for the final attack by your enemies… just as soon as they can pull it together.

It’s really refreshing to finally get a sci-fi themed roguelike for a change, and Arcen seem to be exactly the developers to get this game just right. It’ll be out on Steam “tentatively” on October 8th.