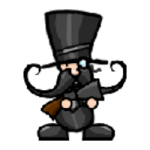 A superb premise and even better execution, 99 Levels To Hell is fresh, challenging, and fun.

Described as a “platform shooter with lots of guns, upgrades, magic, traps and monsters to kill” 99 Levels to Hell has roguelike elements and a boss fight every 10 levels:

Hidden in the darkness of the dungeons are shops, casinos and elevators. And if you search the dungeons carefully, you might find secret rooms that unlock more of the story, and free new adventures, you can play as in your next game. Let this great combination of a platformer and a roguelike RPG suck you into its multi-leveled randomly-generated dungeon. You won’t be back for hours!

It looks quite interesting, as you can see from the trailer below. But how does it play? Hardcore Gamer had this to say:

99 Levels to Hell is a fun and bloody descent into the not-quite-bottomless depths, loaded with replayability and almost impossible to put down until the poor explorer has lost his last heart of health.