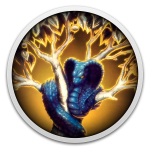 Featuring sex, drugs and a religious cult, adult themes made this game groundbreaking when it was first released, and now, 20 years on, it’s still a wonderful experience.  Ultima VII was the sweet spot of the Ultima series, immediately accessible and good-looking, before it devolved into heavy emphasis on platforming (Ultima VIII) and an unsuccessful excursion into 3D (Ultima IX). Ultima 7 was originally developed in two parts, each of which had an expansion pack. The complete edition collects both parts and both expansions together, resulting in an awful lot of game.

Thanks to the “Exult” project, it’s possible to run the game perfectly on a variety of platforms, including the Mac OS. The graphics hold up well with age (the entire game is from an isometric perspective), the biggest concern is that the original resolution is low. Exult helps with this to some extent, adding both a filtering option to interpolate the image, and also padding out the rest of the frame. It  also includes an optional audio pack, with remastered audio.

The gameplay sees you taking control of hero “The Avatar” who is pulled into a parallel universe filled with all manner of monsters and magic. You begin investigating a murder, and before long you’ll be trying to save the world. Along the way, you’ll talk to people, collect new gear and enlist party members to aid you. There are several minor annoyances that are remnants of that era of gaming. For instance, there’s no in-game tutorial, so you’ll have to read the manual to familiarise yourself with the mechanics, such as how to switch into combat mode (as an aside, Exult provides an option to allow for paused real-time combat, such as found in Neverwinter Nights), and how to manage your inventory.

Once you get over the antiquated interface and let the game suck you in, its a wonderful experience. By the end of the game you’ll be flying a red carpet, smiting enemies with glass swords (that shatter after a single use, mind) and bringing forth armageddon (there’s actually a spell in the game that kills everyone else in the game).

How it get it to work

Update: A fully supported Mac version of the game is now available directly from Gog.com. The following information is no longer necessary and is provided only for posterity (and for those who still wish to use the additional features in Exult).

Note: Exult is still under development, and so it’s not completely stable. It may crash or cause other issues. With this in mind, it’s recommended that you save the game regularly.

Tip: you can specify the paths manually by editing ~/Preferences/exult.cfg and following these instructions.