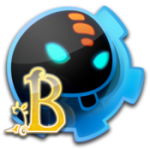 First available on the Xbox 360 in July 2011, it was ported to Steam a month later, and was even made available as a Chrome App, before coming to the Mac App Store and Steam as a native mac application. It’s a charming action game, featuring a bright bubbly art style, and a narrator who seemingly comments on your every move. There are echoes of games like Diablo whereby you can just run around smashing the scenery to bits whilst collecting ingredients for upgrades, and there are some challenge levels that provide a welcome change of pace.

There are a couple of issues with the gameplay. First of all the controls feel a bit awkward, as it was clearly designed with a gamepad in mind and as such you’ll have several keys to use at all times as well as the mouse. Secondly, it’s very easy to fall off the floor, which isn’t too big of a deal because you only lose a small portion of your health bar when that happens. But the game tends to drop you back close to where you fell, and in sequences where the floor is rapidly collapsing, this can mean you get stuck out on an island, or you can get dropped onto empty space. But all in all it’s a wonderful experience.

Some users have reported issues running on their MacBooks, and Supergiant have promised a forthcoming fix. The Xbox 360 controller seems to be supported, but doesn’t work properly (none of the face buttons seem to register). That wouldn’t be too much of an issue if it weren’t for the fact that the alternative control methods left a lot to be desired. There are no real graphics options to speak of, but it seems to perform quite well aside from some frame drop after loading.

UPDATE: An update has been pushed to Apple that fixes most of these issues, including Wireless Xbox 360 Controller support, crashes and adds support for some older Macs.

Really disappointed about this lack of support for controllers! Got this game on Steam on my mac and can’t seem to enjoy it! Such a shame!

Controller should work fine, I recently tried with a wired xbox 360 controller and the latest driver from Tattiebogle, and it seems to work.

Doesn’t want to work for me with the xbox controller and mac either. Although – great tip on the Steam Overlay though.