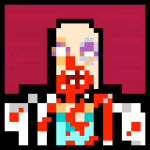 Hotline Miami is more crazed animal than game. It's got the lean, efficient musculature of a predator in the wild, with LSD coursing through its veins and dark purposes in its heart. It wants only for you to use it to kill, beat to death, kill and kill some more. Sure there's a storyline, and some will argue that the extreme violence lurking under the retro-styled shell is merely a metaphor. But those people are wrong. This game lusts for virtual blood.

Score one point for the faceless corporations.

I’m sorry to say that we will be making a change to our YouTube gameplay videos from now on, which is that they will now be recorded with the music turned off.

We’ve made this decision, because we want to keep providing “as-is” footage of games running on Macs, which are otherwise impossible to find when a game comes out, but YouTube’s anti-copyright measures are massively skewed in favour of music rights holders.

It’s a routine experience for us to have to respond to a “copyright claim” every time we upload a video. These claims are designed to prevent people uploading copyrighted music or videos, and in so doing, effectively using YouTube to illegally distribute these works. In reality however, the initial claims are made by algorithms to see if a particular video contains identifiable visual or auditory elements belonging to someone else. In the case of games, which often use licensed music (or alternatively, have their music licensed for purchase as a soundtrack), claims are commonly made because music in the background is picked up and matched. Once a claim is made, the claimant then has the right to show their own advertisements alongside your video. Viewers then have to sit through boring adverts to watch your footage, which is at odds with the reason for us creating the footage in the first place. Everyone loses, except the rights holder of an audio track that happened to be playing in your video.

The important thing about this situation is: it’s perfectly legal, under “fair use”, to upload videos with background music. If you upload a video of a private party, in which there’s some music playing in the background, then in absolutely no way is that video breaking copyright law. As such, we contest every claim made on our videos. Usually the rights holder will release the claim (or it will simply expire). In a few rare cases, our dispute is automatically, or otherwise rejected, in which case we have to appeal the now reinstated claim.

YouTube goes to rather great pains to make you defend your rights, mostly through legal intimidation: 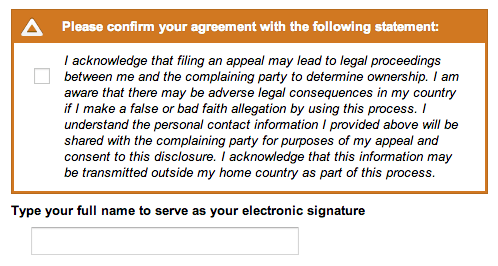 We’ve filled out these forms numerous times (on everything from Limbo to Empire: Total War), and every time we’ve done so, someone, somewhere has decided we are right, and the claim is dropped. But, like doing anything over and over, it’s a little bit of a lottery as to whether whomever is reading these is really paying attention, and so the chances are good that in the long run this process will fail. Even worse, you can only have three appeals open at any one time, regardless of how often you’ve been proven right in the past). Moreover, the system is highly automated, you’re at the mercy of the options provided to you by YouTube, or the not-unlike-shouting-into-the-wind experience of Google’s Product Forums.

The disturbing thing is this: YouTube counts a failed appeal as a “strike” against you. You get three of these strikes, and then your account is gone. What I take issue with is that I very much doubt that the rights holders are being held to a similar standard, that they are free to simply dismiss claims and rely on intimidation to fill their pockets without it counting against them. Our channel has been available for less than a year, we have over a hundred uploads, and now we’ve had to remove one of them, having appealed the decision twice, both times without receiving a reply. 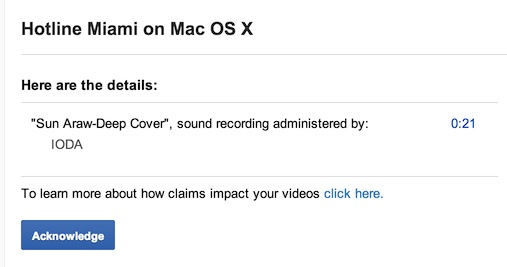 That’s the message from YouTube for our Hotline Miami video this morning. Either “acknowledge” this claim, or do… nothing. Hotline Miami, you’ll remember is a game by an Indie developer, featuring music they found on Bandcamp. Would Sun Araw have made any money from “Deep Cover” were it not featured in the game? It’s hard to say. But it seems that they feel entitled to a stake in every video that happens to have their song playing in the background. I expect to deal with this nonsense with companies whose sole purpose is to protect music composed for a licensed by The Lord of the Rings, for example, but not from music used by an Indie developer. It both sickens and saddens me.

We want to provide you with game footage that showcases the game as it really is. No commentary, no fancy editing, just a look at the game running on an actual Mac, for a few minutes. That’s how we’ve always done it, and that’s how we’d like to continue to do it. If you prefer to see something commentated, or in more of a review style, there are already plenty of channels out there that provide that, and many of those are extremely good.

However, the reality is that we either have to cave in under the weight of the legal resources that music rights holders have, letting them profit from our efforts and your eyeballs, or we run the risk of simply having all of that deleted. We should probably do what larger games review sites do, and secure permission from the publishers ahead of time, but for us that’s simply not practical, especially given that we have much tighter deadlines for publication, and in any case we often do not get a response from publishers (not to mention we don’t think it’s good for them to have more leverage than they already do). Or we take another approach, which is to simply record without music, thus avoiding triggering YouTube’s alarms. That’s the one I’ve opted to take, in the interests of best being able to continue to provide gameplay footage, whilst making our channel as accessible as possible. We’ve also removed the Hotline Miami gameplay video, and have no plans to re-record it for the time being.

We hate to have to sacrifice on quality, but I hope you’ll agree, this was the best course of action for us to take.