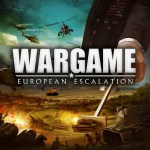 “No one makes real-time strategy games any more”. This is a statement I’ve heard (and made myself on occasion) for a while over the past few years. There’s Starcraft 2 of course, but that’s more of a movement now than a game, and if that isn’t your cup of tea then there aren’t really any alternatives. That’s now changed, with the release of Wargame: European Escalation (I’ll resist the urge to refer to it as WEE) on the Mac.

The game was released for Windows in 2012, and has received several (completely free, mind) expansions since (although these have yet to make it to the Mac version). It’s set in a fictional version of the Cold War of the late 70s and early 80s, with European conflict between Communist regions (collectively referred to as PACT) and NATO (comprising of the US, UK, France and West Germany). Although you’ll play as either NATO or PACT, each of the individual countries provide specialised units.

As with most real-time strategy games, the gameplay involves shepherding individual units (such as a tank or infantry battalion)  around a map with the ultimate objective of eliminating an opponent’s forces. Unlike other games in the genre, there’s no resource collection, and you get a very small number of units to work with. However, that doesn’t mean that it strays into the realm of so-called MOBA-likes, where you need to micromanage individual “hero” units. Units in WEE (sorry) have no activated abilities like they do in other games, and usually don’t need to be told specifically to fire on an approaching enemy. What becomes important instead is using cover to hide them where possibly, using roads to quickly move them to different locations, and watching their fuel, ammunition, and stress levels. Yes, in this game, units will get stressed out if under heavy fire (or threat of so-called “terror” weapons). A panicked unit will not respond to your orders, and will typically flee (assuming they are not killed in the process).

The game is quite tough, and I replayed the tutorial level three times and even read the manual before I’d figured out what was going on. Looking back, there isn’t really that much complexity to the game (in terms of the mechanics), so I’m not really sure why I struggled to get to grips with it. Perhaps it’s because this is an RTS which punishes you for a gung-ho approach, meaning you need to cherish your units rather than just throw them into the grinder that is Wargame’s battlefield.

It’s slow-paced, which is actually a good thing. There’s no dependence upon actions per minute here, and indeed, keeping your units on the move will make them ineffective for the most part as their weapon accuracy will drop (unless outfitted with equipment specifically to negate this). Instead, battles will usually be won through optimal positioning, reconnaissance, and setting up traps for your opponent to fall into. There’s also a heavy focus on supply. You’ll need supply convoys as well as forward operating bases to supply fuel and repairs to your units, and indeed this aspect of the game becomes more important than how much firepower you have. There’s also the notion of influencing command over a region, which is done via (fragile) vehicles for this purpose, which reinforces the idea that everything in the game is about movement. Not rushing, per se, but inching forward, covering ground, sweeping areas. It’s a change of pace from other RTS games.

Most intriguingly however, is the “deck building” metagame. Rather than the standard RTS approach of unlocking units as you progress through a skirmish, here you build a “deck” of different units, which then become available to use when in a game (both single-player and multiplayer). I can’t stress enough what a truly wonderful approach this is, as it adds a whole new layer of strategy usually reserved for something like “Magic: The Gathering” (which regular readers will know I’m a fan of). In a way, it means that someone with a beautifully constructed deck would pose a threat to someone with a very strategic gameplay style.

Of all the complaints I jotted down during my time with the game, the only one that really seems relevant now is a minor one: that the units have no flavour text. When looking at units, there’s a bunch of statistics for weapon accuracy (per weapon) top speed and so on, but what I really wanted to see was a summary of what a given unit did best. What’s really the difference between a SPz II-KURZ and a SpPz LUCHS, for example? (Spoiler: the latter has additional weaponry, armour, is faster and has a longer operational range). Without memorizing the stats of each, it would be difficult to say, whereas a short summary could have told me this in a much more straight-forward way. Still, I fancy that this is a game people will want o get really absorbed in, and in time will come to be familiar with the relative strengths and weaknesses of each.

The game just feels very well-rounded, perfectly filling the hole that has been present in strategy gaming for some time. For those looking for something a little different from StarCraft, or miss the multiplayer that was omitted from Company of Heroes, spend a few hours getting to know European Escalation. Maybe you’ll become lifelong friends.

There are some minor issues with the audio, frequent pops can be heard when wearing headphones, but nothing serious enough to detract from the gameplay. Generally the performance is very good, and zooming all the way in or out of a map is a joy. There are several reports of players being unable to progress past the initial loading screens, but these seem to be limited to the Mac App Store version only (we’ve only tried the Steam version, and encountered no serious problems).

Multiplayer is handled by EugenNet, meaning cross-platform play should be possible with up to 8 players at a time. Other features, such as clans and online ranking are also supported. A skirmish mode is available if you want to practice (or play) against 3 levels of AI.

Several DLC packs have been released for the game, but all have been included for free, and add various features. The latest DLC, “Fatal Error” is not yet available in the Mac version.