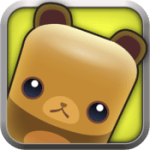 Simple, cute and completely hollow, Triple Town owes too much to its freemium heritage to make it a must-have for the Mac.

Triple Town has been around the block. You can play it on Facebook, Android, iOS and even Google+, and now on Windows and Mac. Borrowing elements from Tetris and Bejewelled, but disguised as Civilization, the game sees you try to build a humble village up to a splendid floating city.

This is gaming at its most casual. There’s no story to speak of, and the game mechanics are completely simple and easy-to-learn, regardless of whether you complete the patronising tutorial. There’s a grid of tiles (the ubiquitous “town”), onto which you place a series of objects. Match 3 (or more) adjacent objects of the same type (such as a bush), and they will combine to form a new object (such as a tree). Match these new objects, and they’ll combine to form yet another object (such as a hut). Thinking about those combinations upon combinations upon combinations brought back memories of learning calculus for the first time. In practice, you’ll look at which object you currently have, and try to keep things organised by planning ahead (placing the final object of a set determines the position of the newly created one).

There are a couple of things that mix things up. There are bears which will move around each turn, unless you trap them between other objects (in which case they turn into graveyards, which are themselves combined into churches). There are crystals, which are wildcards that will complete any set, robots that will remove any object placed in the town, and ninjas that move to a random tile each turn and may only be removed by a robot. There’s also an inventory of sorts, where you can store one item for later use.

The game has a very “cute” look to it, with bubbly sprites and bears that roar at the townsfolk, but it really just serves to underline that nothing is happening. You’re told early on that bears are a problem, but they aren’t really, as having them rampage around your town seems to have no discernable impact other than occasionally getting in your way. Your town will simply grow through placement of objects and that’s it. There’s also a “capital city” hub area where you can place bonus items (using the same matching mechanic) collected from gameplay, as well as select a map type to play. There is very little variety in the map types available, which will merely change the frequency of certain objects or add blocked tiles.

This is gaming at its most placating. You never “lose” a level, you “complete” it. For the first couple of games I played, I actually had no idea I was playing badly, I thought I was actually burning through levels really quickly. There’s also an in-game “shop” with which to buy certain items (such as a robot) during gameplay. Thankfully everything in said shop is bought with in-game currency earned through gameplay, but think about that for a second. This completely undermines the most basic gameplay element (having no control over which objects you have to work with), in which case, what’s the point?

Clearly this is a hangover from the game’s freemium roots, whereby you’d be paying real money to access the shop (indeed, you were also limited to the number of turns you could take in a single session), and I found it best just to pretend it wasn’t there. Even so, the game gets old fast. I had no desire to find out what the final object type was; perhaps this style of game only works on mobile platforms, but that’s a separate discussion, I think.

It doesn’t have the frantic pace of Tetris, and it lacks the pizazz of Bejwelled 3. I suspect there’s some raw strategy nerve in there somewhere just waiting to be prodded, but I couldn’t muster the patience to search for it. There are other match-3 games available, and this is by no means the best of the bunch.

The game runs windowed by default, and in fact will be much more sluggish when run full-screen (and there’s no way to exit the game while in full-screen mode). The graphics are cute but unremarkable, with some token animation thrown in.