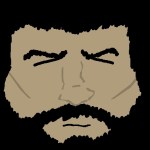 For those who enjoy modern art or film theory, you'll have a wonderful time with 30 Flights of Loving. For everyone else, you may be left wondering what the fuss is all about.

30 flights of loving is not a game in the typical sense of the word. Created by the developers of Gravity Bone (which is also included within this game), it doesn’t so much present you with choices as lead you through a story, and the entire thing can be completed in under half an hour. It’s standard first-person stuff: mouse to look, keyboard to move and interact. And then the game leaves you to it.

Without spoiling the purpose or storyline, I can tell you that much of it is told through a series of flashbacks, and is reasonably similar to Reservoir Dogs in both tone and plot. And there are lots of stairs.

What’s most interesting about 30 Flights is how it plays with staples of the first-person shooter genre. You’ll perform actions that you’d normally perform in a typical shooter, albeit with a great deal less interactivity, but it’s in the contemplation you’ll face after the game has ended that will make you think about both the narrative and the mechanics of the game.

Actually, the real reason to play through the game is to then go through it again, this time with the “developer’s commentary” mode. This will add floating question marks that can be clicked for some behind-the-scenes info. It’s kind of like those plaques on the wall next to exhibits at an art gallery, and many will prompt you to look at things that you had missed |(or hadn’t considered) the first time through.

If nothing else, Blendo Games (and Steam for that matter) deserve some praise in breaking the mould, and achieving what they set out to do: create a game that makes you think. Whether or not you think the end result is worthy of your time and money, will of course be an extremely personal decision.

Given that I collectively spent more time fiddling with settings than playing the game, I couldn’t find a combination that didn’t cause texture tearing throughout. There are a lot of graphics options to play with, but many of them don’t seem to have any real effect.

Last updated June 19, 2013
adventure steam
Details of everything we received from publishers as part of this review are available on out integrity page
Gameplay Video
Steam