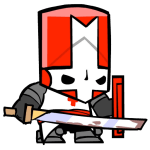 Castle Crashers is a multiplayer sideways scrolling beat-em-up the likes of which you rarely see anymore.

Originally appearing on the XBox in 2008 and developed by one of the guys behind Newgrounds, which was the flash minigame site du jour in the early 00’s, it’s been ported onto the Playstation and now onto Steam for Mac gamers to join in the ruckus.

Taking the pick of 4 colour coded knights with unique abilities and playing solo with one knight or in multiplayer co-op you’ll battle through forests, dungeons, volcanoes, deserts and plenty of the titular castles to the rescue your coordinatingly attired princess and save the world from a maniacal wizard.

Each knight has its own special magical attacks to dispatch the hordes of enemies that plague you through each level; Blue knight freezes, Red knight electrocutes, Green knight poisons and Orange knight flames them to a pile of ashes. Although preference essentially comes down to which is your favourite colour, for me Red has been and always will be the best. Experience points earned by levelling up can be spent on strengthening your offensive and defensive attributes as well as a plethora of animal companions and an eclectic arsenal of weaponry to allow for a greater degree of customisation. Cartoonish enemies ranging from typical fantasy orcs and goblins to the more ridiculous panda bears, demonic cats and dragons with sock puppets on their claws pour into the screen in groups and it’s up to you and your allies to chop, slice, behead and disembowel while you march onward to the final fight.

While light on story, Crashers is chock full of anarchic energy and humour. If you’re old enough to have enjoyed multiplayer classics such as Golden Axe, Battletoads or the X-Men and Teenage Mutant Ninja Turtles arcade games then there’ll be much here familiar to you, however you don’t need to be an expert on the genre to pick up a gamepad and play. The difficulty curve is perfectly tweaked with each level requiring just a little more effort than the last, and while you can get by in the early stages by mashing the attack buttons you’d struggle to get by the badder enemies without whipping off a few well timed combos and using your power-ups with precision. You’ll need to keep your head in battle too; fights are frantically paced and too often once the smoke has cleared you’ll find you’ve been hacking away at thin air if you haven’t been paying full attention.

Every element of the game is hand drawn and wonderfully designed – the development team have made visible efforts that every character, background and dissected enemy gut drips humour and charm as much as they do blood. Some parts are properly laugh-out-loud funny – one of my favourite moments is when you escape from a gargantuan monster on the back of diarrhetic Bambi. As long as you’re not looking for anything too serious there’s loads to love.

Whether you’re a gamer who remembers the classic side-ways scrolling beat-em-ups or just looking for some frantic multiplayer fun, Castle Crashers will storm your keep and slice you to pieces.

For a game that’s technically 4 years old Crashers holds up impressively well. There’s been a few reports of framerate and microphone issues, which the developers have already marked for fixing in a forthcoming update, but on my 2010 iMac I experienced nothing that hindered my enjoyment of a great game. I did occasionally have some trouble finding a game for co-op that wasn’t already full – what this game really needs is a drop-in-drop-out option that would allow players to join games without quitting back to the main menu.

While the game can be enjoyed as a single player campaign, often resulting in quicker levelling than in multiplayer, it’s in the hectic hack-n-slash of a co-op game that the game really excels. What better way to build on or lose friendships than in the chaos of the battlefield? Surviving through wave after wave of enemies takes teamwork and skill, and you’ll be relying on your friends to save you when the going gets rough. If you’re not playing multiplayer you’re not playing the game.

Two playable characters are currently available as DLC, and though not essential both have abilities and styles that may make them preferable from the default and unlockable characters depending on taste. Like if you had a taste for pink knights, that’s covered. All proceeds from DLC purchases go to charity.

Last updated June 19, 2013
action beat-em-up co-op multiplayer comedy fantasy steam
Details of everything we received from publishers as part of this review are available on out integrity page
Gameplay Video
Steam