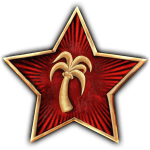 July 25 is a date which Wikipedia tells me is significant for the Nixon Doctrine.

On a related note, on this date this year, you’ll be able to play as a megalomaniacal despot intent on forcing your loyal subjects to expand your territory, and start construction projects purely for the sake of vanity:

With a nation in the palm of their hand, players must decide whether to rule as a benevolent leader, despicable despot, left-wing idealist or champion of the free market. Whatever they choose, they will wield their influence over every aspect of Tropico’s economy, infrastructure, politics and even its place on the world stage. All the while ensuring that a constant stream of revenue finds its way into a certain offshore bank account.

Tropico 4: Gold Edition includes the Modern Times expansion pack, which powers Tropico into the 21st century with an entirely separate 12-mission campaign that challenges El Presidente to protect his nation from unseen and sinister forces including online propaganda and a New World Order. Modern Times features 30 new buildings including a diamond cathedral, the mysterious “Babel Tower” and even a space program.