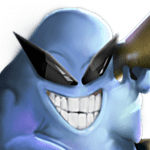 A game in the simplest sense, Super Splatters is extremely good-looking, easy to learn and fun to play.

Watching a video of someone playing Super Splatters, you’ll think two things: that looks like fun, and what is going on there?

The game sees you work through a series of stages, with the objective of bursting (or if you prefer, “splatting”) the eponymous Splatters, releasing their juice in order to detonate all of the jelly-like bombs (it’s probably best not to consider the symbolism of all this too much). The simplest way to do this is to smash them against spikes and rely on their momentum to shower the bomb clusters with juice, but after working through the beginner levels, you’ll unlock more tricks, such as the rather neat ability to “flip” Splatters in mid-flight, reversing their direction; as well as other ways to modify their flight paths.

Whilst playing through the game, I jotted down one word frequently: Peggle. Whether by design or coincidence, Super Splatters shares a lot of design elements with Peggle, but crucially, it borrows all the good ones. The stages are short, but challenging (each has selectable difficulty). The game is exceptionally colourful, but without becoming a visual assault. You’re given a clear targets and constraints every time (destroy all the bombs before running out of Splatters), but without upper limits (do even better to score more points), and perhaps most importantly, it doesn’t give you a chance to wallow in failure. Press “R” at any time to jump back to the beginning of the last stage, almost instantly, and try again.

It’s ridiculously good-looking to boot. The Splatters are animated exceptionally well, with both idle animations and their inevitable self-destruction extremely pleasing to the eye.

There’s some quite inane dialogue that accompanies the introduction of each new game mechanic or level, and there’s some nagging to go to “Splatter TV” to watch other people’s uploaded playthroughs of levels, but fortunately both of these are just shy of becoming an irritant. More troublesome are the controls; aiming with the mouse can feel imprecise at times, especially given that some moves have to be timed carefully (if it weren’t for the ability to rapidly restart a level, this would be more troublesome, I suspect).

The levels can feel a bit stale after a while, although there’s some variety to the basic objective, such as levels that require you to perform certain tricks in designated areas, the basic gameplay always remains the same. That would be more of a problem if this was meant as more of an attention-consuming game; I suspect that most people will want to play this in short bursts as a brief time sink, and it certainly seems designed to accommodate that approach.

The biggest problem for me though is that there doesn’t seem to be enough that a given Splatter can do: you have control over their trajectory, which can be altered slightly at certain points, but there’s nothing you can do to boost their speed after they’ve launched, which I feel would add a lot to the gameplay, and feel like you have more control over what happens (I note here that the aforementioned Peggle also does this, but Peggle is almost entirely about carefully lining up the shot, rather than correcting mid-flight). There’s also some business with Splatters being awarded “stunts” whilst in flight, but this feels entirely undercooked, as there doesn’t seem to be a way of predicting when you’ll get them, and more importantly, they have no bearing on the gameplay.

What Super Splatters absolutely nails is the pizazz: the various sparkly effects when you do something good, the delayed detonations (and slow zoom-in) of the final splatter signifying the completion of the level, the perfect animation and vivid, bouncy design throughout. That alone doesn’t make a game, but it certainly elevates something which is otherwise mechanically sound.

Macs with Intel Graphics cards reportedly need to be running OS 10.8.4+. We encountered no performance issues at all, and as noted, the visuals are lush, and the sound effects are nicely done.